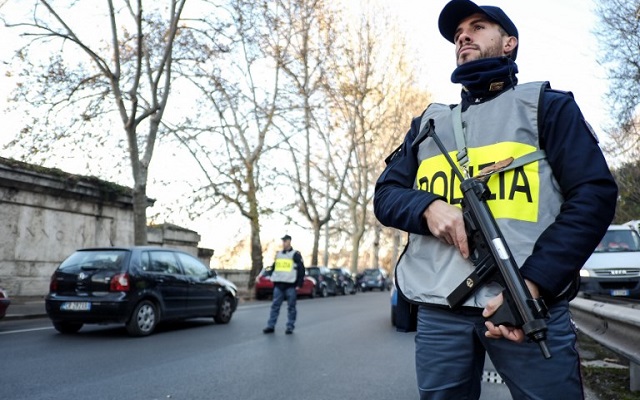 File photo of police on guard at a security checkpoint: Andreas Solaro/AFP

“The man is believed guilty of criminal association with the aim of international terrorism and incitement to crime,” the ministry said in a statement.

Police described the man as “violent and with an extreme inclination to criminal activities” and said he had expressed “elation” at the recent terrorist attack in Manchester, when 22 people including children were killed by a suicide bomber at a pop concert.

He had distributed news and materials about Isis and its aims to fellow guests at the reception centre he was staying at in Crotone, southern Italy, the ministry said. He encouraged his peers to join the terror group and carry out violent acts.

Local police carried out the investigation which was coordinated by the anti-mafia authority (DDA).

According to a report in Repubblica, officers intercepted a phonecall in which the 29-year-old told his sister that “infidels should have their throats cut”.