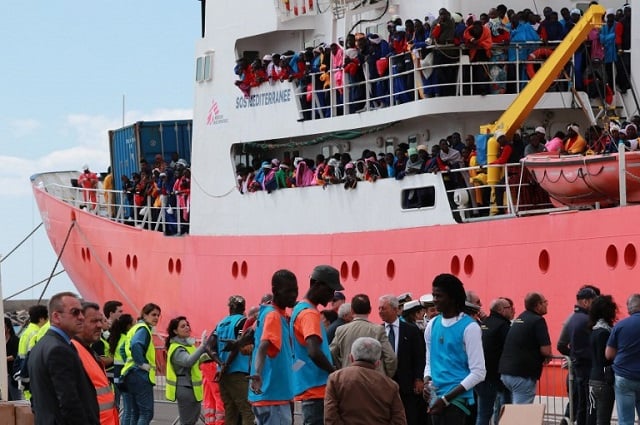 File photo of a rescue vessel arriving to the port of Salerno. Photo: Carlo Hermann/AFP

“This is among the world's most dangerous routes – a journey that no one takes lightly,” it said, as witnesses described the horror of watching friends and loved ones drown.

After reports on Monday of a shipwreck off the Libya which claimed nearly 130 lives, the UNHCR said dozens of families with children were feared drowned in a separate incident after their boat snapped in two and sank off the North African country.

“According to witnesses, a boat carrying at least 85 people broke in two and sank shortly after setting off from Sabratha on Thursday,” spokesman Federico Fossi told AFP.

Three wooden boats had set sail together from the conflict-hit country that morning: those travelling on one of them were rescued at sea and brought to Italy, where they described the fate of the other two.

One was intercepted by the Libyan coastguard and towed back to shore, while they saw the other snap in half, throwing many of those onboard into the sea, Fossi said.

“Some survived, later calling people they knew on the first boat to say they had been rescued by the Libyans. We don't know how many others were lost to the waves,” he said.

There were many families with children from Syria and North Africa among those feared dead.

Migrants brought to Sicily on Monday told aid workers of yet another shipwreck in which seven people had died after falling overboard, including the husband of a pregnant survivor from Cameroon.

“These incidents are a reminder of the grave dangers that people confront when forced to flee their countries because of war and persecution,” UNHCR's Cecile Pouilly said.

“Since the beginning of the year, over 77,000 people have tried to cross the Mediterranean to Europe,” said Pouilly, a spokeswoman.

“Despite the heroic work of those involved in rescue at sea, the death toll continues to rise. Close to 2,000 people are reported to have died or gone missing since the start of the year,” she said.

The UNHCR said it was appealing for “enhanced” rescue operations and safe alternatives for those in need of international protection so that people are not compelled to take such dangerous journeys.

It also urged greater international efforts to address the root causes behind the movement of people to Libya – conflicts and poverty – as many of those arriving in the crisis-struck country find it difficult to leave again if not by sea.

READ ALSO: 'In a refugee home, right and wrong don't always go hand in hand with the law'