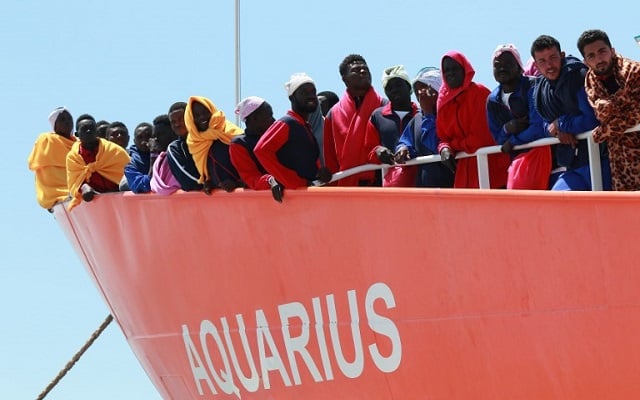 File photo of migrants aboard a rescue ship: Carlo Hermann/AFP

According to four survivors, the migrants left Thursday from Libya but their inflatable boat sank several hours into the journey, IOM spokesman Flavio Di Giacomo said.

The survivors said traffickers intercepted their boat shortly after setting off and stole their engine.

“The boat, which was already overloaded, quickly began taking on water and sank,” Di Giacomo said.

The four survivors – two Sudanese and two Nigerian nationals – were picked up by Libyan fisherman who handed them over to another migrant boat making the dangerous Mediterranean Sea crossing.

Di Giacomo said the survivors were finally rescued by the Italian coast guard and taken to Sicily along with about a thousand others who have been rescued in recent days.

Italy has registered more than 65,000 migrant arrivals since January, up nearly a fifth from the same period last year.

More than 1,800 people have died attempting the crossing since the start of the year, according to IOM figures.

READ ALSO: Rome mayor calls for a stop to migrant arrivals to the capital