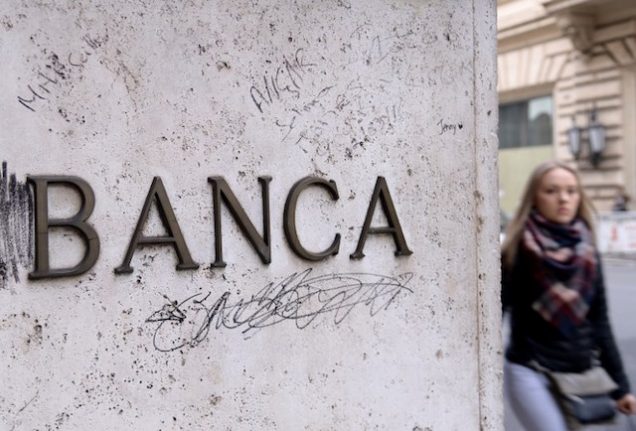 File photo: Filippo Monteforte/AFP
The government was due to meet over the weekend to devise the rescue framework for Banca Popolare di Vicenza and Veneto Banca, the finance ministry said in a statement on Friday night.
READ ALSO: Here's what you need to know about Italy's banking crisis
Both banks face bankruptcy and European authorities say it is for Rome, not Brussels, to deal with their liquidation, involving selling off their good assets and transferring toxic assets to a “bad bank,” essentially financed by Rome.
Italy will stage the rescue along with some support from the country's biggest retail bank Intesa Sanpaolo.
Whereas Intesa has put a symbolic euro on the table, the cost to the Italian state will be around 10 billion euros ($11 billion).
The development comes amid deep concern within the 19-member eurozone at the parlous state of some Italian banks with Rome still to resolve the problem of piles of risky loans sitting on the books of some of them.
READ ALSO: Italy's biggest bank more than doubled its profit in first quarter
In its statement, the ministry said the government would be meeting “over the weekend to adopt necessary measures to ensure banking activity is fully operational, with protection for all current account holders, deposits and senior shares.”
Intesa Sanpaulo will pick up healthy assets “so as to allow the normal opening of branches Monday morning,” according to the Corriere della Sera newspaper.
In parallel, a “bad bank” will be created for toxic assets likely never to be repaid to creditors in an operation the Corriere report put at “between 8.0 and 10 billion euros” to the state.
La Republicca estimated the cost at “10 to 12 billion euros.”
The state will also have to take on board the cost of between 3,500 and 4,000 bank employees set to lose their jobs as well as associated early retirement costs, according to La Repubblica.
Symbolic euro
Intesa Sanpaolo said Wednesday it would be party to the operation — but laid down conditions, not least an insistence its capital ratio and share dividend policy remain unaffected.
The bank said it would pay a “symbolic sum” of one euro in the process and would not raise any capital to fund a rescue exercise which became necessary after the discovery of a capital hole resulting from bad loans.
The president of Italy's industry group Confindustria, Vincenzo Boccia, on Saturday called the rescue proposal a “sensible offer.”
The Venetian banks are not the first to hit the headlines in recent months.
READ ALSO: How Italy's banking crisis has affected life in Siena
Earlier this month, the EU anti-trust authority approved Italy's massive rescue of the country's troubled third-largest bank, Monte dei Paschi di Siena (BMPS).
Founded in Siena in 1472, BMPS has been in deep trouble since the worst of the eurozone debt crisis, with the Rome government set to take a majority stake on a provisional basis to save the bank from bankruptcy.
That plan would allow Italy to inject capital in line with EU rules, whilst limiting the burden for Italian taxpayers after the lender, the world's oldest bank, failed to raise funds on the market last year.
In exchange, Rome must accept a drastic EU-approved restructuring plan for BMPS expected to involve mass layoffs.
The European Central Bank said in December that BMPS was short of a staggering 8.8 billion euros in capital.
Weakened by the disastrous purchase in 2007 of the Antonveneta bank, BMPS quickly drifted into scandal when its management team was accused of fraud and misuse of funds.
Url copied to clipboard!