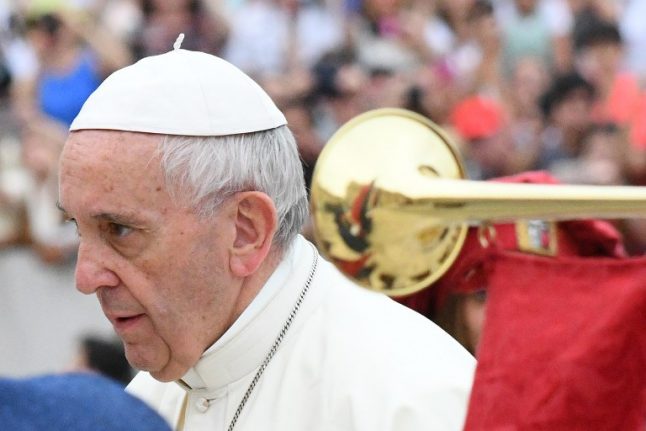 Mauro Inzoli, 67, was defrocked in 2012 after he was first accused of paedophilia, but that decision was reversed in 2014, when Pope Francis ordered him to stay away from minors and retire to “a life of prayer and humble discretion”.

On Wednesday the diocese of Crema in northern Italy said Francis had “ruled definitively” on May 20 that Inzoli — sentenced to nearly five years in prison last year for sex abuse — would be stripped of his clerical status.

The priest, dubbed “Don Mercedes” by the press for his penchant for luxury cars, was found guilty by a Cremona court of eight counts of sexual abuse of children aged 12 to 16 years old between 2004 and 2008.

Francis, who was elected in 2013 and vowed to take a “zero tolerance” approach to clerical sex abuse, had faced heavy criticism for overturning the decision by his predecessor, Pope Benedict, to defrock Inzoli.

Prosecutors had also slammed the Vatican in 2015 for refusing to hand over the results of an internal investigation into the priest.

The Cremona court ruling found that Inzoli had molested the youngsters during confessions, while they were away together on summer and winter camps, and even in hospital, La Repubblica newspaper reported.

One victim told the court the priest “referred to a sort of 'baptism of the testicles' which he said was a Jewish ritual found in the Old Testament as a sign of affection between father and son”, it said.

Inzoli, an ex-confessor of senators who also had a taste for cigars and high-end restaurants, agreed to pay 125,000 euros ($142,000) in compensation to the families of his victims in May last year.

Judge Letizia Plate said the psychological trauma suffered by the children was aggravated by the fact some families refused to believe the stories of abuse by Inzoli, who was known for his charming manner.

Francis has compared sex abuse by priests to participating in a “Satanic Mass”, but he has also been accused of being too soft on paedophiles, extending to them a general policy of mercy he is promoting in the Roman Catholic Church.

An abuse survivor who resigned from his sex-abuse advisory commission in March said elements within the Vatican tasked with protecting children were instead resisting change — to the point even of defying Francis's orders.

Defrocking is considered the harshest penalty for priests within the Church and means the offender is forbidden from exercising any clerical duties at all, even in private.