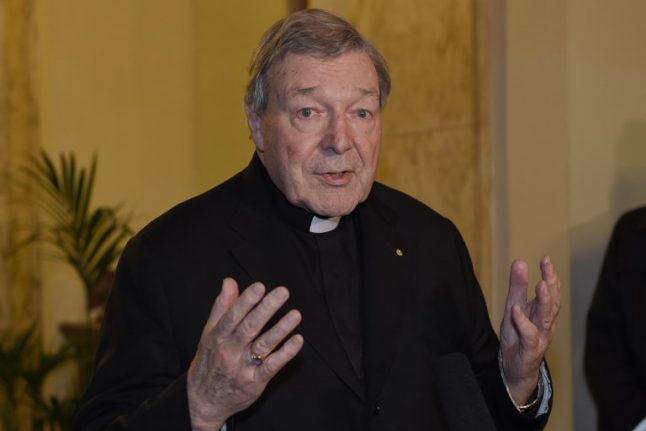 Pell, the Vatican's finance chief and the highest-ranking Catholic cleric to face such charges, had been interviewed in Rome by Australian police last October over the allegations.

Patton said the 76-year-old was summonsed to appear before Melbourne Magistrates Court on July 18.

No details of the charges were given and Patton would not take any questions, citing the need to preserve the integrity of the judicial process.

Catholic officials said Thursday Pell would return home to clear his name after receiving advice and approval from his doctors.

“He has again strenuously denied all allegations… He said he is looking forward to his day in court and will defend the charges vigorously,” the Catholic Archdiocese of Sydney said in a statement.

Australia does not have an extradition agreement with the Vatican, but has one with Italy.

A lawyer for two unnamed men who had made abuse claims against Pell said they were “over the moon” about the charges.

“It's been very difficult for them to stick their neck out,” Ingrid Irwin told Melbourne's Herald Sun. “To come out against someone who is second to God, in some people's minds, has caused all sorts of problems for them.”

The announcement coincides with the final stages of a long-running national inquiry into responses to sex abuse, ordered in 2012 after a decade of growing pressure to investigate widespread allegations of institutional paedophilia.

Pell has appeared before the commission three times, once in person and twice via video-link, during which he admitted that he “mucked up” in dealing with paedophile priests in Victoria state in the 1970s.

The Pell charges stem from lengthy investigations by a Victoria Police task force looking into allegations emanating from the royal commission and from a state parliamentary inquiry.

The inquiry released data in February that showed seven percent of Catholic priests were accused of abusing children in Australia between 1950 and 2010 but the allegations were never investigated.

Some 4,444 alleged incidents of paedophilia were reported to church authorities and, in some dioceses, more than 15 percent of priests were perpetrators, the inquiry heard.

The average age of the victims at the time was 10 for girls and 11 for boys.

Pell was ordained in Rome in 1966 before returning to Australia in 1971 and rose to become the nation's top Catholic official.

He had been accused of historical sex abuse claims when he was the Archbishop of Sydney in 2002, but was later cleared of any wrongdoing.

The cardinal left for the Vatican in 2014 after being hand-picked by Pope Francis to make the church's finances more transparent.

Pope Francis said last year when asked about allegations against the cardinal that “we must avoid a media verdict, a verdict based on gossip”.

Patton stressed that Pell has been “treated the same as anyone else in this investigation.”

“I want to be perfectly clear, the process and procedures that are being followed in the charging of Cardinal Pell have been the same that have been applied in a whole range of historical sex offences whenever we investigate them.”

The Pell charges followed the announcement Wednesday that the Pope had defrocked an Italian priest, Mauro Inzoli, who was found guilty of the sexual abuse of minors, reversing an earlier decision to reduce his punishment.