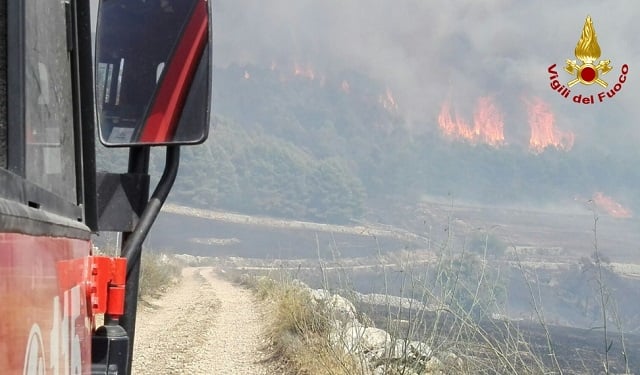 View from one of the fire engines travelling to tackle the blaze. Photo: Vigili del Fuoco

In Ragusa in south-eastern Sicily, a nursing home was evacuated as the flames reached towns.

Firefighters worked for 40 hours to tackle that blaze, which was finally extinguished on Monday morning, leaving local authorities to assess the damage. Regional deputies have called for Sicily to declare a state of natural disaster and the damage has so far been estimated at several million euros, according to Rai News.

Further up Sicily's eastern coast, a separate fire broke out near Taormina, causing huge traffic disturbances as motorists turned back from the fires. A stretch of the A18 motorway was closed during the afternoon while teams from the fire brigade and Civil Protection Agency tackled the flames.

Four fires also broke out across Tuscany, where Italy's Vigili del Fuoco were on Monday morning working to tame a blaze in Grosseto, which had destroyed a field of grain. On Sunday night, 800 guests at a camping ground were temporarily evacuated after a fire in the coastal area of Castiglione della Pescaia.

Also on Sunday, another grain field was hit by a fire in Castelfidardo in the Marche region, causing damage to the crops but not to any infrastructure.

But most of the fires were located in southern Italy, particularly in Sicily and Calabria, where several people received medical treatment for smoke inhalation.

In Tropea, eastern Calabria, a tourist resort was evacuated and further damage to homes, farms, and public buildings was reported.

Since June 15th, firefighters have intervened to assist at a total of more than 10,000 instances of vegetation fire, the majority of them affecting the southern part of the country.

Almost all of Italy has experienced significantly less rainfall than usual this year, with several regions declaring a regional state of emergency because of the water shortage.

In Sicily, June saw 40 percent less rainfall and temperatures up by 1.7C compared to the averages for the month; conditions which, together with strong winds over the weekend, aided the fires' rapid spread.