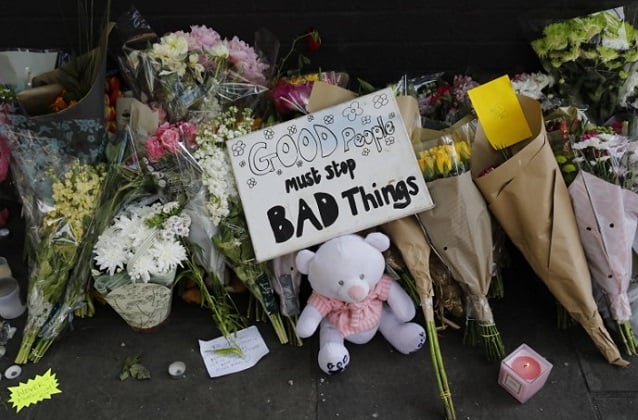 Tributes to the victims and the missing left near the tower block. Photo: Tolga Akmen/AFP

Architect Gloria Trevisan had been living in the English capital for two months with her boyfriend Marco Gottardi when the fire broke out on June 14th this year.

Investigators were able to identify Trevisan by her dental records and a coroner's court heard that the cause of her death was “consistent with the effects of fire”.

The family provided Trevisan's dental records in late June in order to identify her body, but had hoped to wait until Gottardi's body had also been identified before making the news public, Sandrin said.

“Unfortunately, identifying his remains will take longer: it isn't possible to use dental records, and they will have to wait for the DNA test results,” she explained. “The families are doing everything they can, because their wish had been to see them come back to Italy together.” Gloria Trevisan and Marco Gottardi in a photo shared by relatives in an appeal after the fire.

The couple lived on the 23rd floor of the building – the second highest – and she had shared photos to her social media profiles calling their view “fantastic”.

They had been speaking on the phone to their families back in Italy while the building was on fire.

Gottardi's father said his son had initially played down the extent of the fire in order to reassure his girlfriend and family members, and labelled his behaviour “heroic”.

Trevisan had thanked her mother for “everything you have done for me”, family lawyer Sandrin said in an earlier statement, in which she had said the families had “no hope” of finding their children alive”.

British police have so far confirmed 80 people are dead or missing, presumed dead as a result of the blaze which began on the fourth floor and engulfed the entire apartment block. However, they have said that this figure could still rise, and survivors' groups say they believe the true death toll to be much higher.

Prime Minister Theresa May has announced a public inquiry into the blaze, and checks are being carried out on tower blocks across the country which used the same external cladding.