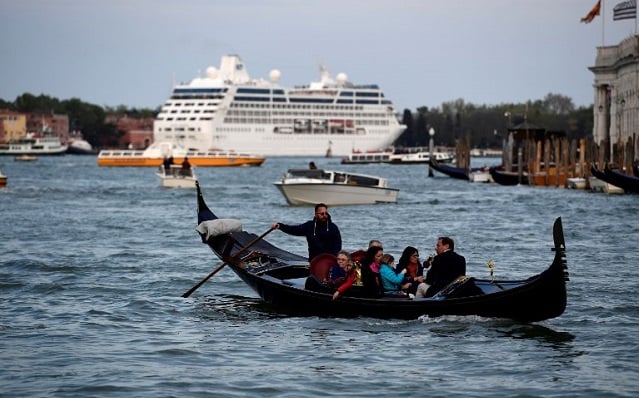 A cruise ship and a gondola with tourists navigate at the entrance of the Grand Canal. Photo: Miguel Medina/AFP

The ministry is reportedly planning to move the largest cruise ships to the port of Marghera, a port city on the mainland opposite Venice, which was developed in the early 20th century in order to accommodate large, modern ships without a negative impact on Venice's tourism and heritage.

Venetian mayor Luigi Brugnaro made the announcement at a Veneto Chamber of Commerce conference at the weekend.

“I can announce that before the summer the government will announce the solution to the problem of big ships,” Brugnaro was quoted by local paper La Nuova Venezia as saying. He added that Transport Minister Graziano Delrio would make the final announcement within the next few months, just as cruise ship traffic increases with the arrival of the summer.

The proposal would see two new moorings built in Marghera in 2019, which would be used by ships weighing over 100,000 tonnes. Within two years, the mayor said, 40 percent of the current cruise traffic should have moved to the Marghera, while the Port of Venice would be reserved for smaller ships, below 40,000 tonnes.

He also said he was hopeful that the Vittorio Emanuele canal between the two cities would be excavated over time in order to increase the possibilities for more dockings.

Brugnaro's comments came after around 2,000 locals marched through the city in protest at 'excessive tourism' on Sunday –  and this was far from the first such protest.

Residents' complaints included the huge quantity of B&B's which drive up rent for locals, and the replacement of traditional artisan shops with those selling cheap souvenirs, but cruise ship tourists have remained a persistent target from those who say mass tourism is forcing native Venetians out of the city.

Campaigners such as the 'No grandi navi' (no big ships) group argue that not only do the boats themselves cause pollution, but the short time on shore means cruise tourists crowd the historic centre without contributing much to the local economy.

The group organized an unofficial referendum in mid-June, in which almost 99 percent of those asked voted to ban the vessels from the lagoon.

In theory, cruise ships over 96,000 tonnes were banned from entering Venice back in 2013, in a bid to save the city after Unesco threatened to put it on an 'endangered' list if it failed to solve the problem.

The ban was intended to be introduced in phases, starting in early 2014 and aiming to cut cruise ship traffic by 45 percent – after it had risen by 400 percent over the previous five years.

But due to the lack of alternative moorings for the boats, and a clause in the law which delayed the ban until a solution was found, little has changed.

READ ALSO: 'Rowing in Venice is unique – it's the closest you'll get to walking on water'