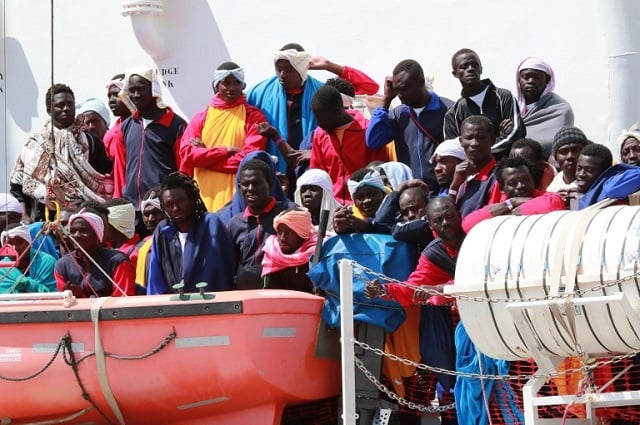 File photo of a rescue boat arriving in the port of Salerno. Photo: Carlo Hermann/AFP

Ministers from across the bloc gathered in the Estonian capital Tallinn after Italy, which has accepted some 85,000 of the 100,000 people who have arrived this year, appealed desperately for help.

The influx has revived fears of a return to the European Union's migrant crisis of 2015, when hundreds of thousands of people flooded into the continent in search of a better life.

On the table is a European Commission plan which earmarks 35 million euros ($40 million) in aid for Rome as well as proposals for working with Libya and other countries to stem the flow of migrants at source.

Most of those landing in Italy are sub-Saharan Africans who have crossed by sea from Libya, a journey that has so far claimed more than 2,200 lives this year, UN figures show.

The influx has exacerbated tensions between Italy and neighbouring Austria, which this week threatened to send troops to the border to stop migrants entering. 'No Border' activists demonstrate at the Brenner border in 2016. Photo: Giuseppe Cacace/AFP

“This meeting today will be very ambitious, even if it is informal,” said Estonian Interior Minister Andres Anvelt, whose country has just taken over the rotating presidency of the European Union.

“We will discuss and work towards a solution and an action plan for Italy.”

Unveiled on Tuesday at the European Parliament in Strasbourg, the plan proposes the EU bolster the Libyan authorities through a project with Italy to set up a joint rescue coordination centre.

It also suggests that the EU help Libya to strengthen control over its porous southern border and that the bloc work further with other African countries – Egypt, Niger, Ethiopia and Sudan – to ensure they take back their nationals. Migrants disembarking in Italy after being rescued off the Libyan coast. File photo: Giovanni Isolino/AFP

“We will show full solidarity with Italy in this struggle,” said commission first vice-president Frans Timmermans on Tuesday.

“Italy has shown an unprecedented level of solidarity with the refugees in the last couple of years… Now everybody needs to do their part on this across Europe.”

Also on Thursday, Rome is hosting a meeting of foreign ministers from European and African countries affected by the migrant crisis, in addition to EU and UN representatives.

Italy has been pushing for other European countries to open up their ports to rescue ships in order to share the burden.

Under the EU's asylum policy, asylum seekers are supposed to be processed in the country where they first arrive.

On Monday, the UN refugee agency (UNRWA) warned that Italy cannot continue absorbing the tens of thousands of migrants landing on its shores on its own.

“This is not sustainable. We need to have other countries joining Italy and sharing that responsibility,” said Vincent Cochetel, UNRWA's special envoy for the central Mediterranean.