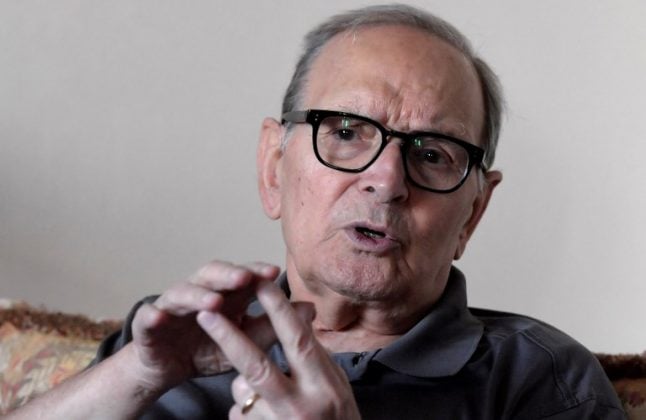 “In the cinema you cannot actively listen to the music – there's dialogue, noises, special effects, it all distracts the audience,” he told AFP as he prepared for the next stages of a world tour celebrating 60 years in the business.

“Music has to be listened to and the concerts allow the audience to listen to my music, and my music alone,” the 88-year old Italian said in an interview in his large Rome apartment.

Morricone's long-running collaboration with Spaghetti Western film director Sergio Leone saw him pen prize-winning soundtracks for everything from the “Dollars Trilogy” to “Once Upon a Time in the West”. The former trumpet player has composed over 500 scores for film and television – including Roland Joffe's “The Mission” and Quentin Tarantino's “The Hateful Eight” – and over 100 classical works.

He cites Karlheinz Stockhausen, Pierre Boulez, Luigi Nonno and Aldo Clementi as composers who have influenced him – along with Goffredo Petrassi, who his dubs “my master” – but also has a fondness for Stravinsky and Bach.

But he shakes his head at the idea of being compared to prolific composers of the past like Mozart or Rossini and said he does not mind knowing that he is most famous for the film soundtracks, deemed to be catchier.

“I was able to compose music freely, and in such different forms, not only because I could rely on technology, but also because it was essential that I change my style for every film. Every movie required it,” he said.

The composer, who played in jazz bands in the 1940s before he started ghost writing for film and theatre, is considered a fine conductor too – though it is a title he rejects.

“I was asked to direct my music. The problem is that I am not a real conductor, I do not direct the music of other composers,” he said. Morricone, who has worked with some of the most acclaimed Hollywood and arthouse filmmakers – from Roman Polanski to Bernardo Bertolucci and Pedro Almodovar – says his success lies in evoking thought patterns.

“I tried to create a way to write music with a lot of pauses, made up of almost monosyllables, or three syllables put together, and then a pause, a bit like a thought that comes and goes and repeats itself in a different way,” he said.

He says there is no secret recipe that he follows – “absolutely not” – other than being true to himself.

“I have always wanted to change, but at the end I remain myself”.

NOW READ: The Italian town, home to only six people, which refuses to die