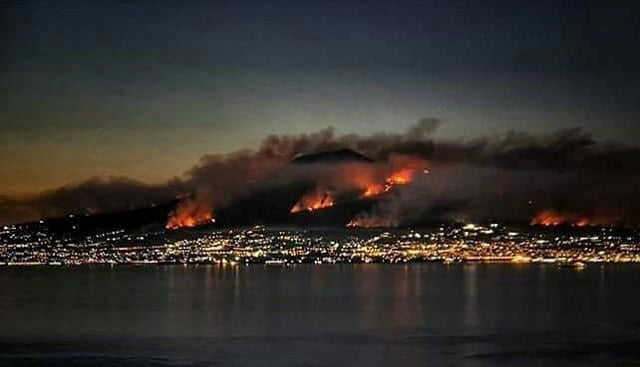 The flames continued to spread during the night. Photo: Marco/Meteorologo777

A total of 70 firefighters, together with Civil Protection volunteers were tackling the fire on the ground and using three helicopters.

Naples mayor called the blaze an “environmental disaster, [which has] destroyed our land, a crime against life. Endless pain.”

Fires had been burning in the Mount Vesuvius national park for several days, but the situation became more critical on Tuesday when two of the fires joined together and spread, due to dry weather and winds.

Smoke clouds rose over one kilometer high and were visible from Naples, Sorrento, and Pompeii, the ancient Roman site which was destroyed in an eruption of Vesuvius.

Several homes, hotels and restaurants were evacuated as a precaution – including one wedding party. Meanwhile, the smoke had travelled across the whole metropolitan area of Naples,  with one local resident telling The Local: “Smoke has invaded the entire Vesuvius area. It is difficult to breathe, even in Naples city.”

The fires are believed to have been started by arsonists, according to forestry police, and prosecutors have opened a file against unknown persons.

“It is sad that criminals have to destroy the land in which we live and it is painful to receive daily messages from people unable to sleep,'' said Marco Ricci, a priest of a town close to Ercolano.

Speaking to news agency Ansa, Ricci called on Italian president Sergio Mattarella to approve the use of the armed forces in tackling the fires. Late in June, the priest had helped organize a march in the area to protest illegal waste dumping and toxic fires close to Mount Vesuvius.

Italy has seen a huge number of fires, particularly wildfires, following months of lower than average rainfall and high temperatures, and the situation is most serious in the south. On Friday, there were 441 'active incidents' including 288 wildfires across the country, firefighters said.

Dozens of animals were killed in one fire in Sicily which destroyed hundreds of hectares of farmland over the first weekend of July.

But fires were also ravaging farmland in other parts of the country, with two serious incidents in Emilia Romagna on Monday.

Rome's mayor, Virginia Raggi, said the number of forest fires in the municipality had almost quadrupled in the period since June 1st, compared to the same time last year. She said she had attended a meeting at Rome's prefecture on Monday “to discuss the measures to be taken to tackle this emergency”.