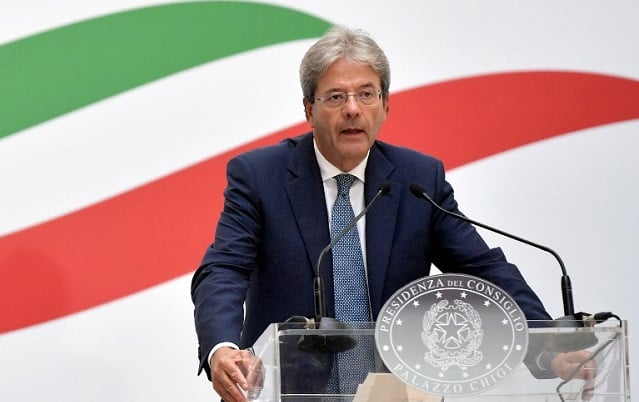 Gentiloni met with French President Emmanuel Macron and German Chancellor Angela Merkel in Trieste before an annual Western Balkans summit. Italy took in more than 3,500 migrants rescued off the coast of Libya in just the past few days.

“Italy has done and will continue to do its part in rescuing and welcoming (refugees). But it is fighting at the same time a migration policy that does not rest on only a few countries, and that is shared by the entire European Union,” he said.

Several Italian officials and aid groups have called for help in handling the influx, with the authorities already registering 85,000 arrivals on its coasts in the first six months of the year.

That has put mounting pressure on Gentiloni's centre-left government from rightwing and populist opposition parties ahead of legislative elections set for early 2018 at the latest.

He urged EU countries to pursue joint solutions such as economic programmes in Africa and cooperation in the Mediterranean and in Libya, as well as “a common effort to guide the activities of NGOs” carrying out rescue operations along the Libyan coasts.

Macron expressed his “solidarity” with Italy even as he acknowledged that France had “not always done its part”.

“We are in the process of accelerating relocations and we will continue to do so,” he said.

'Will not give ground'

But Macron also insisted that there was a difference between “political refugees and economic migrants”.

“Each time that refugees, people to whom we grant asylum, are identified, France must be able to welcome them,” he said, but “our countries cannot accept women and men who, for economic reasons, want to come live in our countries.”

ANALYSIS: Debunking myths about why people migrate across the Mediterranean

Merkel, emphasized economic accords with African nations from where most of the migrants arriving in Italy are coming from.

“We must fight the reasons for migration through partnership, in particular with Niger,” she said.

She also underscored the need for political stability in Libya, which most migrants cross to reach the Mediterranean.

The three leaders also reaffirmed their commitment to building a more closely integrated Europe, ahead of the Western Balkans summit of seven EU and six regional countries.

The summit, the fourth of its kind, is part of the so-called Berlin Process launched in 2014 to encourage development in the Western Balkans.

By Sabine Wibaux and Ljubomir Milasin