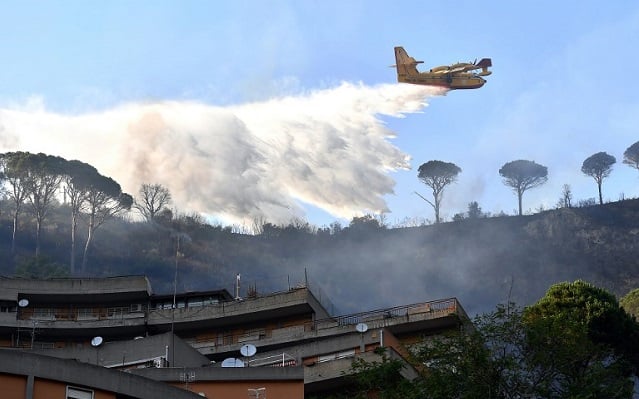 An aircraft drops water on one of the fires. File photo: Giovanni Isolino/AFP

One of the victims, a 69-year-old man, died in the Cosenza province of Calabria while trying to extinguish a blaze close to his land, Rai News reported.

Emergency services intervened to help the man, but were unable to save his life. He was the second victim of July's fires, after another man, aged 68, was found dead in the Vibo Valentia province on Thursday morning.

Seven of Sicily's nine provinces were put on maximum alert for fires by the Civil Protection Agency on Thursday as firefighters tackled hundreds of wildfires across the whole country.

Several villages have been evacuated – including an entire tourist resort, where around 1,000 visitors were forced to leave by boat on Wednesday evening – and a small number of people have been treated for smoke inhalation.

The fires have also affected Sardinia, where a care home and several houses were evacuated in Arzana on the east of the island.

And on the slopes of Mount Vesuvius, the army was called in to tackle a series of blazes which sent smoke billowing into the air, visible from Naples, Sorrento, and Pompeii. All roads to the volcano have been blocked off by the army and Civil Protection Agency.

An animation from the European Space Agency shows the location of the different fires in southern Italy.

In total, the wildfires have burned 26,000 hectares of farmland in the last month alone, according to a dossier presented by environmental organization Legambiente. That's almost the same amount of land as was destroyed by fire over the whole of 2016.

Half of the damaged land was located in Sicily, where fires have burned down vast areas of pine forests as well as farms, and several dairy cows have been killed.

An unusually dry spring and hot summer temperatures have contributed to the quick spread of fires, with strong winds causing further concern and making the firefighters' job very difficult.