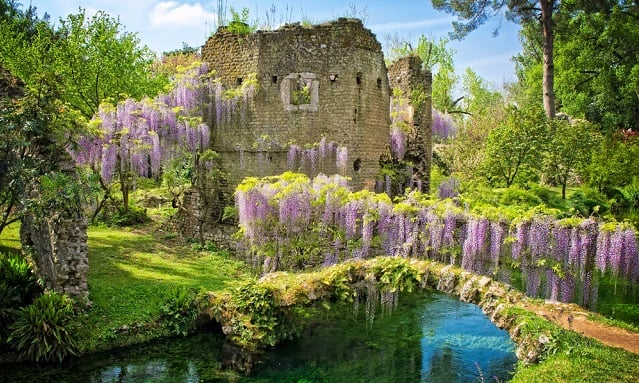 In winter this tiny town is a skiing paradise, in summer it's a hikers' haven – all year round, the Dolomite mountains provide an impressive backdrop to San Cassiano. The area has plenty to see, from First World War relics to well-preserved cave bear dwellings, or you can spend your days walking the aptly named 'Path of Meditation'. More commonly known as the Park of Monsters, the gardens were created in the 16th century when the architect carved spooky and grotesque sculptures, as well as mythical creatures, supposedly as a way of dealing with grief after his wife's death. One inscription in the park says the sculptures were designed and set out “just to set the heart free”, and the lack of a rational pattern or set route to follow adds to the other-worldly appeal. When people talk about Tuscany's rolling hills, they're probably picturing Val d'Orcia, a World Heritage Site which offers miles and miles of barely-touched landscape, dotted with photogenic villages and ancient castles and fortresses. It's also a region well known for its wines, so a road trip through the region should be combined with a visit to the vineyards. These are the tallest man-made waterfalls in the world, and we have the Ancient Romans to thank. The flow can be turned on and off, which usually happens at midday and 4pm today, and it's best to time a visit with the moment the falls are turned on. Try to catch a glimpse of the rainbow of Marmore, a phenomenon which has inspired painters and poets throughout the centuries on their Grand Tour. If the beautiful views aren't enough, the site also offers white-water rafting. You'll need to book a guided tour to see these gardens, and opening times are somewhat limited, but it's worth making the effort. Ninfa was once a bustling medieval town, but the locals abandoned their homes after a tough few decades which brought internal struggles and a malaria outbreak. In the 1900's, the spot was rediscovered and painstakingly transformed, so that now visitors can admire plants entwined with the ruins, and cross the castle's moat to explore inside. These cone-topped buildings are called 'trulli', and while they may look like fairy dwellings, they're used as homes, shops, and restaurants. Tourists even have the option of staying in one. They were originally built in the distinctive styles as a tax dodge, since homes made without using mortar were exempt from levies, and they're now a designated Unesco World Heritage site. While in the area, check out the Museo del Territorio, a structure made up of ten trulli which gives information on the building techniques and the history of the area.

The 12th-century castle, first built as a fortress, offers beautiful views over Lake Garda whilst also being picturesque in its own right. It boasts a drawbridge and is one of few examples of a lake fortification, also acting as the entrance to the town of Sirmione. This hilltop town looks spectacular at any time, but especially so when rising out of fog or early morning mist. First inhabited over 2,500 years ago, the town is now known in Italy as 'the dying town' after an earthquake caused public institutions and many residents to move out, as well as the fact that erosion of the cliff means the island is in danger of crumbling away. Today it only has around a dozen permanent residents, mostly populated by urban families who use it as a weekend getaway or tourists, but it retains an untouched, medieval feel. Once overlooked in favour of the larger, more glamorous lakes, Iseo is increasingly winning popularity with visitors. Isola di Loreto, originally a convent island, is now in private hands, so it can't be visited but only admired from the water. However, the whole region is worth exploring for the hills, small towns and Monte Isola, Italy's largest lake island where visitors can hike, admire the churches, or indulge in fresh seafood at the many restaurants. Called 'The Rainbow Lake' in the local language, Carezza's lake was formed by a magician who threw a rainbow and jewels into the water in a bid to seduce a mermaid – or at least that's how the story goes. But the glistening colours set against a mountain backdrop will get even the most cynical wondering if the tale could be true. Take the cable car up to this fortress, built 750 metres above Trapani for incredible views. This was once a sacred site, a temple to the goddess Venus – the clouds that often swirl around are known as 'Venus's kisses' – and it was used before that to honour the divinities of the various peoples that settled in Sicily. The rest of the hilltop town is also worth an afternoon's visit, with plenty of history, architecture, and quiet streets. Staying in Sicily, this network of 5,000 burial chambers cut into the rock provides an awe-inspiring setting. Taking one of the hiking routes through the area is the perfect way to escape the crowds of the Sicilian tourist resorts, and at the end of the walk lie a river and cave for exploring and swimming. There's a reason it's called the beautiful island. Isola Bella is home to a lavish palazzo, decorated with shells, rocks and art on the inside, and the whole thing is surrounded by magical gardens with a view across the lake.