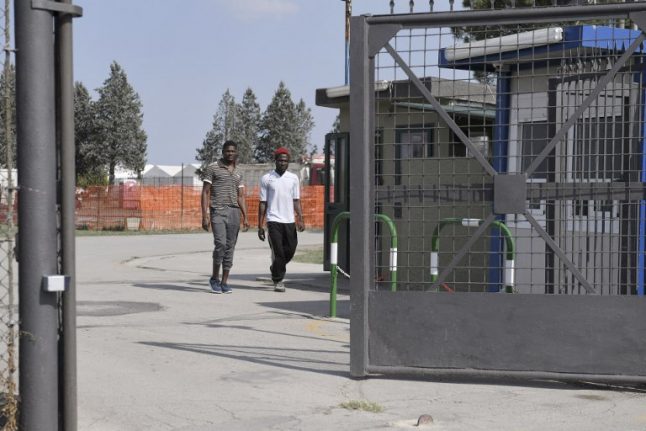 The Cona mayor said asylum seekers are treated "like garbage" in what he called "a human warehouse". Photo: TIZIANA FABI / AFP
Inside vast white tents erected in a former military zone on the outskirts of the tiny village of Conetta, some 1,400 men from across Africa while away their days, packed onto endless rows of bunks as the temperatures rise.
Many escape for a few hours to cycle around the area: they are met with hostile banners calling for them to leave.
“I used to call this place a modern lager,” Cona mayor Albero Panfilio told AFP, referring to concentration camps. The commune of Cona includes the little village of Conetta.
“After two years this is (still) a place where human beings are squashed in together, with no hope for the future. Now I call it a human warehouse. The migrants arrive, they don't know where to put them, they have a warehouse, they dump them here.”
The asylum seekers were treated “like garbage”, he added.
Panfilio says the 190 residents in Conetta have also suffered. Among several protest messages scrawled on sheets and hung up in the village square, one reads simply “Repatriate the migrants”.
'Lots of hostility'
Around 10 kilometres away (6.2 miles) in Bagnoli di Sopra, some 700 migrants are crowded into another former military base. There are more barbed wire fences among the endless fields of soybean and corn, and no access to journalists.
Mayor Roberto Milan said the residents there had held sit-ins demanding the migrants be removed, but to no effect.
“The tension is great, there's a lot of hostility. There are many of them and it's not possible to create ties (with the local population). That leads to mutual distrust,” he told AFP by telephone.
“They come, they go, they ask for money,” he said. Many of the migrants attempt to kill time by walking or cycling around the area. Photo: TIZIANA FABI / AFP
Moussa Bamba, a 31-year old from the Ivory Coast, said he would “pay a price” for speaking out about conditions inside the Conetta camp, but pleaded for authorities to allow them to use their time profitably.
“I ask for one thing, training: teach us some skills while we wait here. To be a bricklayer, electrician, mechanic. To allow us to integrate if we stay, or return having learned something,” he said.
Over 85,000 people have been brought to safety in Italy so far this year after being rescued in the Mediterranean as they attempt the perilous crossing to Europe. Many are fleeing horrors in crisis-hit Libya.
What has been described as the worst migrant crisis since World War 2 began in earnest in 2014, when 170,000 people landed in Italy. Europe forced Italy to close its borders in 2015 to prevent people travelling onwards.
Since then, the number of people blocked in the country has risen sharply, along with requests for asylum, which jumped from 63,500 in 2014 to 123,000 in 2016. Those filing the requests can wait up to two years for a result.
In the meantime, humanitarian organisations like the Red Cross warn that the conditions in the reception centres are deteriorating.
'We need you'
Guinean Kaba Aissata Mohamed, a 33-year old who worked as a journalist back home, said he and the others inside want nothing more than to be treated like human beings and allowed to join society.
“We need you, we need the local population,” he said. “The local residents should at least be aware of our existence. We want to live with you, with the world outside (the camp), that's what's important.
“But here we are hemmed in, we are isolated,” he added.
Italy's centre-left government has promised to redistribute migrants so small towns do not feel overwhelmed. But so far, little has been done.
“What's going to happen in the future if they continue to arrive?” asks local Pietro Grapeggia as he watches the young men peddle past on their round-trips to nowhere.
“They are good kids, well behaved, strong, full of energy,” said the 75-year old.
“You see them wasting away their days going around on their bicycles, it doesn't seem very normal to me.
“And when the government stops paying to look after them, then what will they do?”
By AFP's Ella Ide and Kelly Velasquez