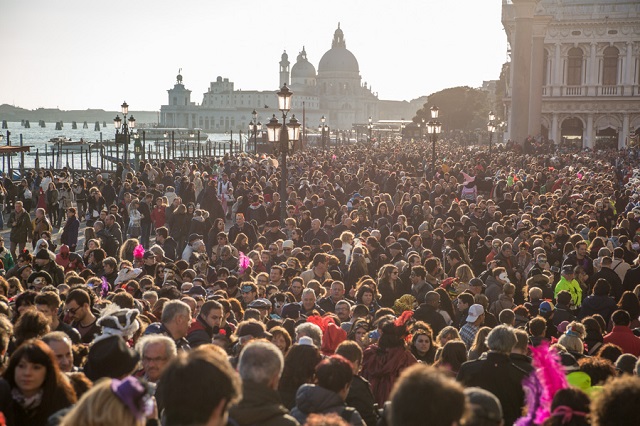 By the 17th century, a trip to Venice had become a rite of passage for upper class northern Europeans, who flocked to the lagoon city as part of the Italian Grand Tour. Writers and artists drank in inspiration from the city where imposing architecture was reflected in glittering waters and Venice became a symbol for Italian romance.

Fast forward to the 21st century, and the city is groaning under the weight of tourism.

Cheap flights, huge cruise ships, and the city’s Instagram appeal attract so many travellers that on a given day, there are more visitors than residents in the Veneto capital. It's the type of tourism as much as the sheer amount that causes problems: the majority of visitors don't stay overnight in the city, meaning most of them spend their time and their money in the same small areas.

Small businesses and artisans' craft shops have been replaced by identikit souvenir stalls and fast food restaurants to cater to day-tripping bargain hunters. In recent years, Venetians have staged frequent protests against the mass tourism which has pushed up rents and forced many families out of their hometown.

But could the visitors hold the key to Venice's survival?

“Venice is a one-industry city; it relies on tourism, like our bodies rely on food to survive,” says local resident Sebastian Fagarazzi. Sebastian Fagarazzi's family had to close down its textiles shop due to the pressure created by mass tourism; he says all his friends have left the city. Photo: Venezia Autentica

Fagarazzi and his partner, France-born Valeria Duflot, have launched Venezia Autentica, a social enterprise with the aim of promoting responsible tourism and supporting local business in the city.

Frustration with visitors has grown to the point that last summer, angry locals plastered the city with flyers reading 'Tourists go away! You are destroying this city', but the couple believe not only that tourists could help save Venice, but that a large number of them want to do so, and would if they were given the tools.

“Tourism is the problem, but it’s also the only solution,” Fagarazzi tells The Local. “Everyone protests [against excessive tourism], but no one has done much to try to have an immediate positive effect.” Duflot met her partner on a visit to Venice before later making the city her home and remembers the difficulty she had in finding out about the real side to Venice, beyond the tourist hotspots and gondoliers.

“When I spoke to locals and met Sebastian, I learnt a lot about the city and enjoyed my time there much more. But at the start,it's very hard to get that information and to know how to have a positive impact,” she says.

The 30-year-old came up with the idea for Venezia Autentica when walking down the city's main street one day. To one side, she saw a crowd of cruise ship tourists; to the other, a group of young Venetians, carrying flags and singing local songs.

“In a flash, I thought, wouldn’t it be great if we could get these two groups to understand each other? I know other people care about the impact they have on Venice, and if just a small proportion of the visitors thinks like that, then we can have a huge impact, particularly as the Venetians now are so few,” Duflot explains. The pair are sceptical about recent measures introduced by city authorities aimed at protecting the city's heritage, including bans on new hotels and takeaway food joints in the historic centre.

“They’ve basically closed the stable door after the horse has bolted,” says Fagarazzi. “It should be the city authorities who regulate tourism – you can't expect visitors to do in depth research; after a 40-hour working week, you come on holiday to relax! But it’s meaningless political manouevring. The bans only apply to new establishments when there are hundreds already, and there will be exceptions when it suits the authorities.”

One thing missing from the new measures is any concrete proposal of support for Venetian-run businesses or local residents, such as tax exemptions for entrepreneurs or housing support for young people.

The two Venetians hope their business will offer some support to local entrepreneurs and artisans by highlighting their shops to visitors and educating tourists on the expertise and long hours that go into making a typical mask, for example. A Venetian artisan works on a mask while a young girl watches. Photo: Venezia Autentica

Fagarazzi is acutely aware of the pressures local businesses face: in 2015, his family was forced to close its popular clothing shop in the city centre, after facing increasing pressure linked to the effects of mass tourism.

At the age of 32, he says the majority of his friends have been forced to leave because they can no longer make a life in Venice – “and it’s my generation that makes babies!”

“People worry that Venice could disappear because of flooding, but it actually could disappear much sooner,” Fagarazzi comments. “Without the Venetians, it’s not Venice. Time is running out.”

The local population has dropped below 55,000, less than half the figure of 40 years ago, as Venetians find themselves priced out of their hometown. What's more, it has one of Italy's oldest populations; despite the fact Veneto is the country's second wealthiest region, youth unemployment is extremely high.

The couple hope that by supporting local artisans, they can help them stay in business and create opportunities for young Venetians to continue living in the city and carve out rewarding careers. A lace-maker sits at work outside her shop. Photo: Venezia Autentica

On their website, they offer information about the city, guidelines for responsible tourism, and a selection of local restaurants and artisan shops that have the 'Authentic Venice' seal of approval. All have been personally tried and tested by the couple, their family and friends; as Fagarazzi says, “we need to be sure that it's a consistently good experience -a business which makes Venice proud”.

Aside from following the online guide, there are a few clues tourists can look out for when hunting down a true Venetian experience. Duflot explains that there is no particular neighbourhood to go to for artisan shops, but there are some red flags to look out for.

“If you see someone standing outside a restaurant beckoning you in, or menus with pictures and flags of different countries, walk in the other direction!” she warns. “And in ‘artisan shops’, if you see any kind of massive sale or very cheap products, it won’t be good quality – which can be dangerous too.”

On the other hand, a true artisan shop will likely have a clear specialization in one kind of product; a craftsman at work – or signs that they've been working; and prices that reflect the fact that the simplest mask, for example, takes around seven hours to create.

“But the best litmus test is always to ask the salesperson about the craft. A seller of mass-produced souvenirs might badger you to buy things or repeat the same catchwords like 'Murano glass'; an artisan will be able to tell you everything about what they do. Their eyes will light up,” says Duflot. A mask-maker shows off her creations. Photo: Venezia Autentica

The pair say they hope that would-be visitors aren't scared off Venice by the stories of anti-tourist sentiment, but also that they will take more time to learn about the city.

“It's not a theme park to tick off your bucket list; it's a real, living city with people and struggles which visitors should appreciate,” says Fagarazzi.

To get a glimpse of Venetian life and better understand the city, he advises visitors to venture off the well-trodden tourist trail and explore side streets and quieter piazzas. Not only does this ease the pressure on the city's main thoroughfares, it's also more likely to lead to a unique shop or experience.

“As a Venetian I'm envious, because I don't get to experience the magic of getting lost and finding that incredible shop you’ll never find again. It’s like the Room of Requirement in Harry Potter – sometimes you stumble across the very thing you’re looking for, totally at random,” he says.

“Venice has always been very welcoming to all kinds of people,” adds Duflot. “Here, it doesn't matter who you are or where you come from – just treat Venetians and their city well.”