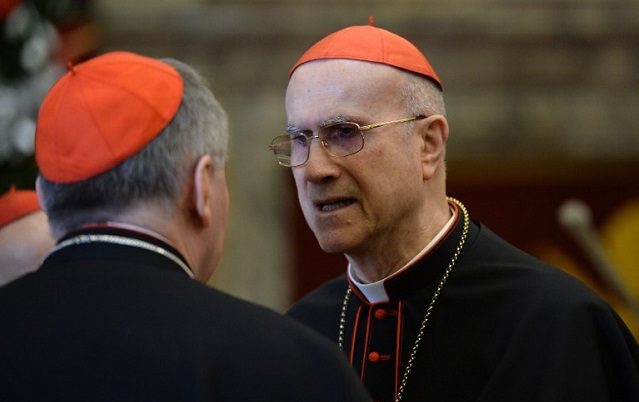 The former executives of the Vatican's Bambino Gesu pediatric hospital are accused of diverting 422,000 euros ($485,000) in donations to a company tasked with renovating the home of Tarcisio Bertone, the state's former second-in-command.

Former hospital president Giuseppe Profiti and ex-treasurer Massimo Spina, who face up to five years in jail, were present in the cramped gold-gilt courtroom.

Bertone, who was not part of the investigation and is not accused, was absent.

The Italian cardinal could be called later in the trial as a witness for the defence, according to lawyers cited by a small pool of journalists present at the hearing.

The defence team challenged the Vatican court's jurisdiction on a technicality but were overruled.The next hearing was scheduled for September 7th.

Profiti has said the funds handed over for the renovation of the 300-square metre (3,230-square-foot) apartment were an investment because there had been a plan for the hospital to use the space for future fundraising events.

Bertone, who had served as secretary of state – a role equivalent to prime minister – under Emeritus Pope Benedict XVI, had agreed to host the events, according to a letter the cardinal had written to Profiti, published in Italian media.

The funds were transferred to a company run by Italian businessman Gianantonio Bandera, which is registered in Britain and carried out much of the work on the residence, according to the religious website Cruxnow.com.

The cardinal spent 300,000 euros of his own money on the restoration on top of the hospital foundation's funds.

– the modest hotel Pope Francis chose to live in after rejecting the opulent papal apartments that come with his job for a more humble lifestyle.

Bertone, 82, has defended his luxury lodgings, saying he shares the apartment with a community of nuns who look after him, and the flat's huge terrace is actually part of the building's communal area.|

When the use of charity money was revealed in a book published by an investigative journalist in 2015, the cardinal donated 150,000 euros in unofficial damages to the Catholic foundation.

READ ALSO: Pope Francis wards off whingers with 'no complaining' sign on his door