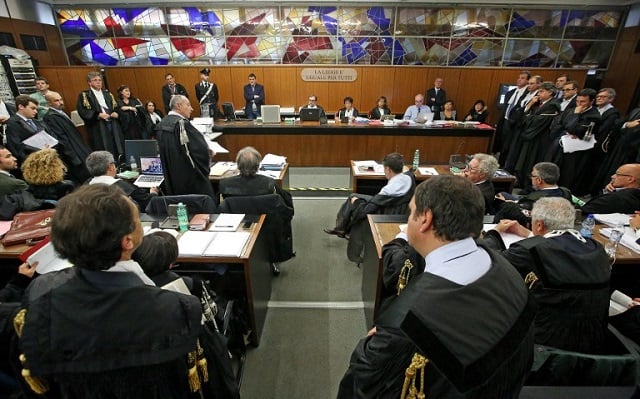 A scene from the opening day of the trial in 2015. Photo: AFP

Massimo Carminati, 59, a convicted gangster with a history of involvement with violent far-right groups, had been accused along with 45 others of operating a “mafia-style” network that used extortion, fraud and theft to
divert millions of euros destined for public services into their own pockets.

His right-hand man and fellow defendant Salvatore Buzzi, 61, was handed a 19-year jail term by the court at the capital city's Rebibbia jail.

The scandal, which led to a 20-month trial in the high-security prison, had been dubbed “Mafia Capitale” by the media.

But judge Rosanna Ianniello said Carminati and Buzzi were guilty of corruption but not of mafia association.

“The sentence is stiff, but the whole trial revolved around the question: 'Was it mafia or not?',” Carminati's lawyer Ippolita Naso said.

“'Mafia Capitale does not exist,” she said.

Of the 46 people on trial, five were acquitted, including two men accused by prosecutors of being the link between the criminal band and the powerful 'Ndrangheta mafia in Calabria in southern Italy.

Carminati and Buzzi were already behind bars in prisons in Parma and Tolmezzo where they were kept under the notoriously harsh 41-bis regime, aimed at cutting mafia inmates off completely from their former criminal associates.

“The 41-bis will have to be repealed. But who will give Carminati back the 22 months spent under it?” lawyer Giosue Bruno Naso said.

Carminati and Buzzi watched the verdict by video conference, Carminati standing to hear his sentence while Buzzi sat and took notes.

One-eyed Carminati was given a ten-year prison term in 1998 for membership of the Banda della Magliana, a criminal crew which ruled Rome's underworld in the 1970s and 1980s.

Carminati's brother Sergio told media at the court that the trial was “ridiculous. Massimo is still paying for the 1980s”.

In 1983, Buzzi received a 30-year prison sentence for the murder of an accomplice in a forged cheques racket.

He served only six years after pursuing his education and successfully portraying himself as a reformed character.

The Rome scandal had been a major factor in leaving the city so cash-strapped it can barely afford to repair its buses when they break down, fill potholes in its streets or prevent trees from falling over for lack of
upkeep.

Mayor Virginia Raggi said “a deep wound” had been inflicted on Rome by “a criminal association able to heavily influence the political decisions of this city,” adding: “We are paying the price every day”.

“We now need to stitch the wound back together by taking the path of legality – no easy task, we need to keep our eyes peeled at all times” for corruption, she said.