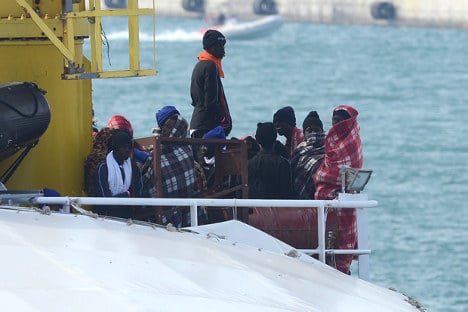 Close to 94,000 people have been brought to safety in Italy so far this year. Photo: Giovanni Isolino/AFP

“Thirteen corpses in total. People who had names, surnames, mothers, fathers, friends, and lives,” said Proactiva Open Arms, a Spanish NGO involved in rescues in the Mediterranean, on Twitter.

“We have found 167 people drifting,” it said earlier noting that “several pregnant women and mothers” were among an initial toll of 11 dead.

A Save The Children ship on Tuesday rescued some 70 migrants who were also attempting to cross in a small boat.

The Italian coastguard confirmed the deaths and said worsening weather conditions at sea were likely to dissuade traffickers for now from setting more boats full of people to sail in the Mediterranean.

Close to 94,000 people have been brought to safety in Italy so far this year, according to Italy's interior ministry, an increase of over five percent compared to the same period last year.

The fresh deaths came as Italy's Interior Minister Marco Minniti met with NGOs to discuss a new “code of conduct” to regulate the operations of privately run rescue boats.

He said that another meeting had been organised for Friday with some charity groups to work through the proposals.

The 12-point code, which has been given the green-light by Brussels, would ban aid vessels from entering Libyan territorial waters and oblige them to accept anti-trafficking police officers on board.

EU member states on Tuesday agreed to extend the Sophia rescue operation for another 18 months amid growing concern at the number of migrants crossing to Europe.

States agreed that the code would now include surveillance of the crossing route to gather information on illegal trafficking and smuggled oil from Libya.

At the same time, it would look to increase information sharing on human trafficking, a hugely profitable business for the criminal gangs involved.

While some of the NGOs operating in the Mediterranean have agreed to sign the code, others have insisted doing so would put the lives of vulnerable migrants at sea in flimsy vessels at risk.

Minniti has insisted that those who do not sign the document will not be allowed to dock at Italian ports.

Although Italy has repeatedly stressed that it will continue to save lives at sea, Rome has upped its requests for fellow European states to help shoulder the load – particularly in terms of providing shelter to those rescued.

On Tuesday, the EU pledged more measures and more money to help Italy.

He also promised to look at ways of pressuring Bangladesh to take back its migrants, possibly using the threat of visa restrictions as leverage.