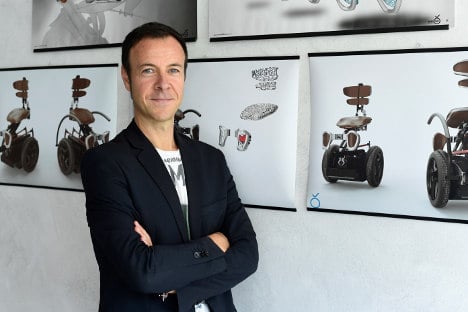 The Italian drew inspiration from the Segway – the two-wheeled, self-balancing, electric vehicle that allows visitors to nip around cities without walking – and came up with the “MarioWay”, a hands-free, two-wheeled kneeling chair.

With its high seat, it allows users to do everything from ordering a coffee at a bar to plucking a book off a high shelf.

The Italian government was so impressed it proudly showed off the chair to the G7 transport ministers in June.

The aim was to create “a tool of social integration”, Vigentini told AFP at his headquarters in Bergamo.

The 45-year-old found working with young people with mental and physical disabilities “an extraordinary adventure”, but was disheartened by the prejudice they faced.

“At best, people approached them like a child,” he said, as if because they were sitting closer to the ground they were somehow more infantile.

Racking his brains for a way to change the situation, he came up with the idea of “trying to put an ergonomic seat – like those from the Nordic countries that were very fashionable in the 1990s – on a Segway”.

“Nine out of ten people I talked to about this idea looked at me as if I came from another planet,” he said.

But he was persuaded to take the idea to a start-up competition in Naples in 2012 – and made it to the final.

Buoyed, he set up a team to study the ergonomics involved and brought in a dozen disabled people as collaborators.

Users of traditional wheelchairs are seated so that “the organs in the upper part of the trunk are compressed”, while “almost the whole weight rests on the ischium” – the lower and back part of the hip bone.

This position “aggravates the pathologies of people with disabilities and results in other issues; digestive, respiratory, urinary or circulatory,” he said, adding it also causes leg muscles to waste away.

But for users of Vigentini's invention, “the upper part of the trunk is straightened”, strengthening muscles which go unused in traditional wheelchairs.

The chair can go up to 20 kilometres (12 miles) an hour on a battery life of 30 kilometres.

It is equipped with “sensors that read the position of the body”, so that “if I move my upper body slightly forward, the MarioWay advances slightly,” said Flaviano Tarducci, the company's business development manager.

“It's the same to move backwards, while to go from side to side you move your pelvis slightly left or right,” he said.

The design means that tasks that have been very challenging for traditional wheelchair users – such as opening doors or carrying a glass of water to a table — can be carried out with relative ease.

Vigentini hopes to help destigmatize the wheelchair, which has remained unchanged for nigh on a century.

In the search for cool, his team has even swapped notes with a company that customises Harley Davidson motorbikes.

But Vigentini said he and his team are “doing everything we can” to lower the price to around €10,000 by signing a deal with an industrial production partner.

And one day he hopes able-bodied people will use MarioWay too as a means of getting about town — much like a bicycle or Segway – which could help make mobility differences, between those who are disabled and those who are not, a thing of the past.