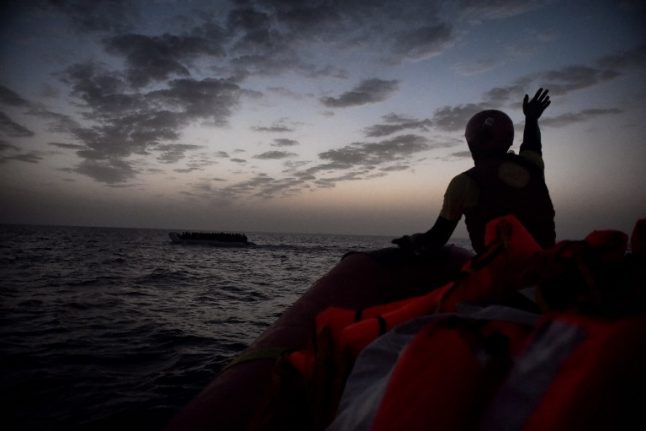 The three aboard the ship Golfo Azzurro, chartered by Spain's Proactiva Open Arms NGO and rescued Sunday, were in limbo, illustrating policy confusion a week after Rome introduced a controversial code of conduct for charity boats rescuing migrants in the Mediterranean.

A Proactiva spokesman said the vessel was some 100 nautical miles (180 kilometres) off the Libyan coast as the NGO attempted a rescue operation normally coordinated with the Italian coast guard.

When the Golfo Azzurro approached the Italian island of Lampedusa, the closest to the Libyan coast, Italian authorities denied it passage.

Proactiva's mission head Gerard Canals told AFP that Malta had said Italy was responsible for the rescue and should take the migrants.

“The rescue on Sunday happened under the coordination of the Italian MRCC (coastguards headquarters) in Rome but in the Maltese SAR (search and rescue zone).

“We asked to disembark in Lampedusa because it was closer but the Italian authorities told us to see with Malta.

“We cannot take them back to Libya because it's against maritime law” with Libya not considered as a safe port “so we have to take them to a European port.”

Proactiva is one of four NGOs which have signed up to the code  — the group formally did so Tuesday at the Italian interior ministry — whereas five counterparts operating search-and-rescue activities off Libya have rejected the new rules.

Having been denied entry to Italy and Malta to change crew and load supplies, the Golfo Azzurro was stuck between Malta and Sicily midday Tuesday.

Italian authorities last Saturday did allow 127 migrants to disembark on Lampedusa after their rescue by Prudence, a vessel chartered by Doctors without Borders (MSF), which has not signed up to the new code.

Also Tuesday, C-Star, a vessel chartered by a group of European far-right activists opposed to migrants, was still moored off the Tunisian coast as fishermen and a powerful union prevented them from loading supplies.

Two weeks ago, Turkish Cypriot authorities released the C-Star's captain and crew after detaining them over accusations of using false documentation.

The activists' “Defend Europe” scheme was launched by anti-immigration campaigners from France, Italy and Germany who raised 170,000 euros ($200,000) via crowd-funding to hire the vessel.

In a separate development, UN's new envoy to Libya on Tuesday endorsed an Italy drive to strengthen the Libyan coastguard to ensure boatloads of migrants are intercepted before reaching international waters.

Human rights campaigners fear the approach could place thousands of people with a right to asylum at serious risk.

But Ghassam Salame, a former Lebanese culture minister appointed in June to head UN operations in Libya, described the cooperation between Tripoli and Rome as a “very constructive” way of dealing with an acute problem.

“It would be absolutely unrealistic to ignore the seriousness of the challenge of irregular migration,” Salame said after meeting Italian Foreign Minister Angelo Alfano in Rome. “There are hundreds of millions of them across the world. This is a very serious problem.”