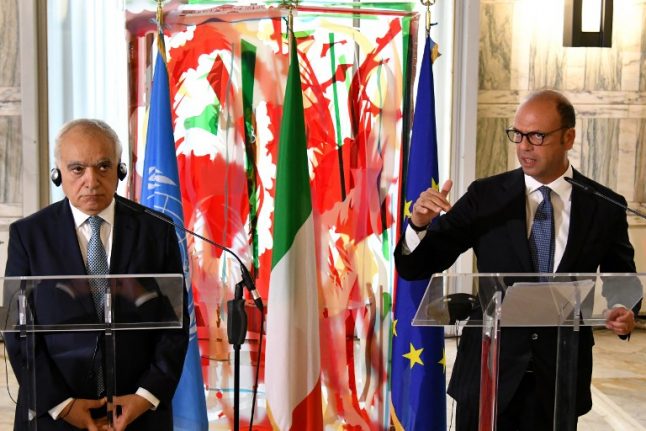 “The UN must show leadership,” said Alfano, cited in La Stampa. “Up until today there have been too many deals, too many negotiators and zero results. The instability in Libya is not a Serie B game, it is an absolute priority,” added Alfano.

Alfano reemphasized his support for the Tripoli-based volatile government of Fayez al Sarraj. He also stressed the need for economic aid to Libya as well as measures to tackle people smugglers operating out of the North African country.

Al Sarraj is prime minister of the Government of National Accord formed in December 2015. Skirmishes however continue between forces loyal to the former Benghazi-based Libyan House of Representatives, Tripoli and southern rebels. ISIS and Al Qaida in the Maghreb continue to wage war for control of oil facilities and territory, as do former Gaddafi loyalists.

Salame stressed that only “cooperation and transparency between Italy and Libya” will lead to the best results. Salame also praised the Italian navy for its continued efforts off the Libyan coast.

Ghassam Salame, a former Lebanese culture minister appointed in June to head UN operations in Libya, described the cooperation between Tripoli and Rome as a “very constructive” way of dealing with an acute problem.

“It would be absolutely unrealistic to ignore the seriousness of the challenge of irregular migration,” Salame said after meeting Italian Foreign Minister Angelo Alfano in Rome. “There are hundreds of millions of them across the world. This is a very serious problem.”

“I also believe each country has an absolute right to control its borders and that the best way of doing that is through cooperation with neighbouring countries. We are on a good track of strengthening cooperation to meet this challenge which is a challenge for all of us.”

More than 600,000 refugees and other migrants have reached Italy from Libya since 2014.

Italy's centre-left government is under intense pressure from domestic opponents and EU partners to close down the route. Its navy is providing technical assistance to the Libyan coastguard, which has also been provided with new patrol boats and training by its former colonial master.

Alfano said the cooperation was beginning to bear fruit, in a reference to a more than 50-percent fall in the number of migrants rescued at sea during July, when compared to the same month in 2016.

Italy has also been working to stem migrant arrivals in Libya through better controls on the southern border, cooperation with countries like Niger, Chad and Mali that migrants transit on their way to the Mediterranean and a voluntary repatriation programme.

Refugee agencies say Libya is too unstable for any potential refugee to be safely returned there.

There is particular concern over the fate of migrants who end up in the country's detention camps, where conditions are usually squalid and a lack of regulation means people risk torture, sexual abuse and forced labour.

Alfano insisted the Italian government would not compromise on its commitment to human rights.

“It is not a derby between security and humanity,” he said. But he acknowledged Libya's migrant holding facilities leave much to be desired.

“Now that we have an opportunity to reduce the fluxes and organise refugee camps in Libya, we have to invest heavily in an international, multilateral humanitarian operation to ensure these camps have an acceptable standard in terms of human rights and every other respect,” Alfano said.

Minister for Transport Delrio, talking in an interview with Repubblica, stressed that the Italian coastguard will continue to collaborate with all NGOs to try and solve the crisis in the Mediterranean. Pressed on whether NGO boats who break the embargo to enter Libyan waters are inadvertently aiding human traffickers, Minister Delrio urged all NGOs to collaborate.

“They have to work together and for all, I understand their point of view when they say, 'I'm an NGO, not the state.' But I am the state and I want to end the shameful trafficking of human beings,” Delrio told Repubblica.