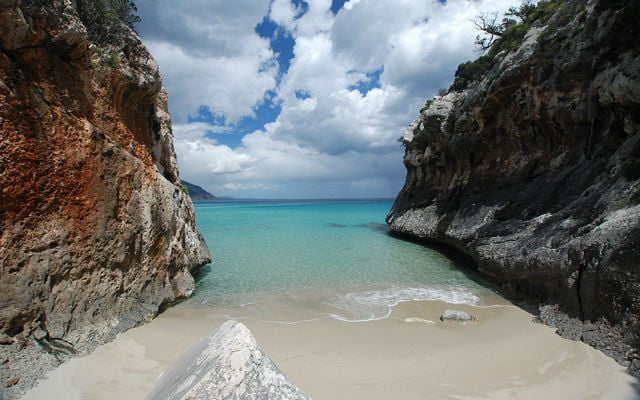 Sardinia is more than an island. The name alone conjures up legends and myths, like Zanzibar or Timbuktu; a land shrouded in mystery that inspires images of slow-grazing sheep, Robin Hoods and dusty roads.

This sandal, as the Greeks denominated it due to its shoe-like shape at the heart of the Mediterranean, is one of Europe’s best-hidden treasures.

Sardinia has shaded itself from the destructive collateral of tourism with its proud and deep-rooted culture. Not even the onslaught of EasyJet, Ryanair and a daily fleet of commercial ferries sailing to the four corners of the island have ruined the people’s innate rhythm of life.

As one winds between valleys of olive trees and fields of grazing sheep, abandoned churches and ancient rock caves salute hills painted with red poppies and thermal springs.

Nuragic constructions and burial sites, containing the ancestors of Sardinians from 3,000 years ago, dot the landscape. Time seems to roll on in Sardinia, gathering little moss.

A quick detour off the main roads reveals a dream landscape, like walking into a museum and sitting in a Dali painting. Virgin forests, hosted by expanses of rock and granite millions of years old, give way to peaks and views of Corsica.

Below, pristine beaches, practically unspoiled and off the beaten track, caress the azure and emerald green waters of the Mediterranean.

Both versions of the film Swept Away were filmed at Cala Luna, on the east coast, and if there was an Oscar for beaches, Guy Ritchie’s remake featuring Madonna would have had something to cheer.

From Alghero in the northwest, the Catalan legacy on the island, to Santa Teresa di Gallura and Cala Gonone in the East, Sardinia is a wonder waiting to be explored. Arabs once ruled the island, as did various Catalan, French and Italian dynasties, and its multifarious identity is evident today in its cuisine, language and architecture.

While Sardinia is part of Italy, it remains an autonomous region, bound together by its own language, Sardinian, and customs and traditions independent of the mainland – yet punctuated by distinct castles, forts and dishes only miles away from each other.

Homer labelled – or perhaps libeled – the Sardinians sardonic, but the truth is the local people are incredibly friendly, welcoming and open to foreigners.

While it is true that in recent years there has been growing resentment against land grabs by overseas investment consortiums, in the treasured creeks and coves of the island every barman and shepherd is a potential friend.

Even in Orgosolo, the eponymous village once home to famous bandits, the local shopkeepers welcome tourists into their stores singing Sardinian folk tales. Some 15 miles south of the town of Nuoro, the landscape of Orgosolo was made famous by Nobel laureate Deledda’s novel Doves and Hawks.

In the late 1960s, an Italian anarchist movement gave birth to a street art movement in the town, painting stories of the local farmers’ battles against a brutal feudal system on the walls of the historic centre. Today, the city is a gallery of liberation murals, protest pieces and a visual history of Sardinian struggles against foreign occupation.

Leaving Orgosolo, the heart of Sardinia, one reaches Mount Ortobene, the highest peak or the ‘head’, where a statue of Jesus sits watchful eye over the superstitious sandal of God.

A few miles west of Orgosolo in the town of Mamoiada, the Museum of Mediterranean Masks offers a fascinating insight into the North African legacy on the island.

The town of Nuoro (accent on the ‘u’), a transport hub for central-eastern Sardinia, is also worth visiting for the ethnographic museum, which offers a history of Sardinia from the Nuragic Era until now and the town’s quaint cobbled streets.

But the true gems lie some fifty miles east at the Bay of Orosei in Cala Gonone, where the road ends and one chooses either to trek across the mountains to secluded beaches and enclaves or to hire a boat along the coastline to the eponymous (but far more crowded) Cala Luna.

The walk from Cala Fuili to Cala Luna takes two hours and is not for the faint-hearted, but the views and surprises are unmatchable.

While the beach at Cala Luna is the staple postcard image of Sardinia, the dozens of smaller beaches along the Bay of Orosei provide enchanting vistas and crystal-clear waters. Venture far enough and you will find your own beach.

Traveling north up the east coast, one reaches the Costa Smeralda and the exclusive resorts of Porto Cervo and Baia Sardinia.

It is near here, in Porto Rotondo, that former PM Silvio Berlusconi is alleged to have hosted ‘bunga bunga’ parties in his submarine-accessible Villa Certosa.

The scandal-ridden former premier has a personal 4,000-seat amphitheatre and remote-control fountains in his complex, but the surrounding feel of quieter towns and resorts offer far better value for money and an authentic Sardinian feel. Santa Teresa di Gallura, at the tip of the Northwest, is a gem not to be missed.

Shaded by the Maddalena Archipelago, where Garibaldi spent time in exile, Capo Testa is the furthest point north in Sardinia; a crater landscape nestled between cliffs, pools and caves. At the far end of Capo Testa lies the appropriately named Valle della Luna, or Valley of the Moon, a moonscape of caves and grottos, some inhabited.

Heading back west along the North coast, the road reaches Castelsardo, where a 13th century Arab castle is perched between more beaches. The island’s flag motif, four black pirates wearing a bandanna, was first flown from here.

In the north-western far tip, the harbour and beaches around Stintino, immaculately clean and splendid, are forced to play second best to the Bay of Orosei. The nearby abandoned mining village of Argentiera also has a haunted charm.

Alghero is the pick of the towns in northern Sardinia and a good place to arrive or get organised. The city wall and lungomare – the seafront – are lined with cafes and coral jewellery stores, the local specialty; there is a distinctly Catalan feel. The nearby Neptune's Cave, seventy million years old, is a favourite with stalagmite fans.

The selection of fresh fish and meats across the island is still very good value for money compared to, say, Catalunya or Provence.

Yet despite the natural 'benessere' or lust-for-life of the local people, Sardinia, like much of the eurozone, faces tough economic times. Unemployment has reached a twenty year high on the island, according to ISTAT, the Italian National Institute of Statistics, with more than ten percent of the population aged 15 or over out of work.

Rich foreign investors have bought much of the east coast, making it harder for locals to buy land and build a home. Qatar Holding recently bought a chain of hotels in the east of the island and more than 2,000 hectares of undeveloped land.

Giuseppe, a waiter in Porto Cervo, says Sardinians are getting used to seeing large swabs of land go into foreign hands. “It’s time to move to the eurozone,” he says.

In Doves and Hawks, Deledda wrote of a landscape “of red houses built on a peak of granite, with steep, rocky paths” – a land that “seeps water from peak to coast.”

While the Euro and Ryanair have arrived in Sardinia since Deledda’s departure, nearly a hundred years of solitude have ensured little has changed.

To get the best out of Sardinia, you’ll want a car. While Europcar and Hertz offer international protection, Sardinya Cars do very good deals and have offices in all major towns and cities across the island.

Sardinia has hundreds of hotels and B&B’s catering for different prices and needs. The Hotel Sandalion in Santa Teresa di Gallura above Olbia o the east coast is a charming bargain.

Sandalion is run by a multi-lingual former cruise-ship barman, Alvaro (the owner of two charming turtles), while the Hotel Blue Marino in Cala Gonone offers good vistas of the coast and is a perfect access point for the beaches at Cala Gonone.

For further information about Sardinia (called Sardegna with a silent ‘g’ in Italian), visit: