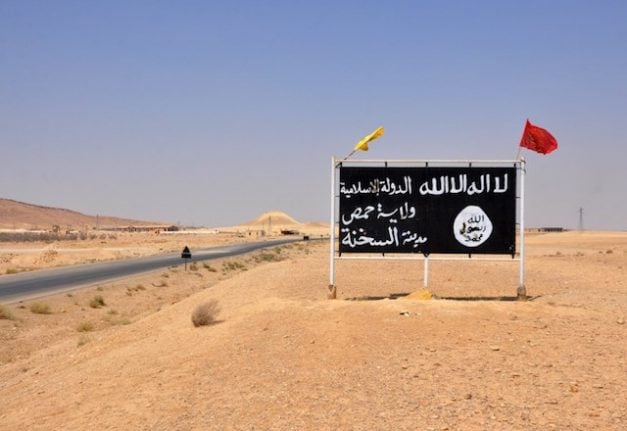 An Is group poster in the central Syrian town of Al-Sukhnah in August 2017. File photo: Stringer/AFP
The announcement came as security was raised after vehicle attacks in Barcelona and elsewhere, and a widely-reported warning from the Islamic State group that Italy is next on its hit list.
ANALYSIS: How real is the threat from dormant Is cells in Italy?
Administrative expulsions, which are not subject to any appeal, are one of the main planks of Italy's strategy for preventing the kind of jihadist attacks suffered by other European countries.
Sicily decided Saturday to introduce barriers preventing vehicular access to six pedestrianised areas of the island's capital Palermo, reflecting fears of truck attacks.
Additional barriers are to be placed on potentially vulnerable locations in Milan, a meeting of regional security officials decided.
The prefecture for the Rome region approved an increase in the number of guards for its major tourist sports and said it would step up monitoring of trucks moving around the capital.
The latest individuals deported included a 38-year-old Moroccan said to have been radicalised while in prison for minor crimes.
His status was bumped from medium to high risk after he and other prisoners were seen enthusiastically celebrating the Stockholm truck attack in April which killed five people.
The Syrian, who also operated under a false Tunisian identity, was arrested in 2015 for involvement in illegal immigration and placed under house arrest at a centre for asylum seekers in southern Italy.
There, he was caught celebrating the attack in May that killed 22 people, many of them children, at a concert in the British city of Manchester.
The suspect, whose age was not released, had managed to avoid the fate of two previous expulsion orders issued in 2011.
The third man expelled was a 31-year-old Moroccan whose expressions of support for IS were thought to be linked to a psychiatric disorder for which he received compulsory treatment after being arrested for theft.
The interior ministry said all three had been flown back to their respective countries of origin.
READ ALSO: 'Jihadist' planned Leaning Tower of Pisa attack: media
Italy is regularly threatened by IS propagandists. SITE, a private intelligence group which monitors extremist organisations, said Saturday it had picked up fresh online messages promising the country would be next to be targeted.
Italian officials stress that they have yet to be alerted to an imminent, credible threat on its territory or against the Vatican.
A government panel said in a report in January that Italy was less exposed than neighbouring countries to the risk of attacks carried out by homegrown radicals.
Although Italy has not yet suffered an Islamist attack, one person died and 1,500 were injured following a stampede caused by a bomb scare in a crowded Turin square in June.