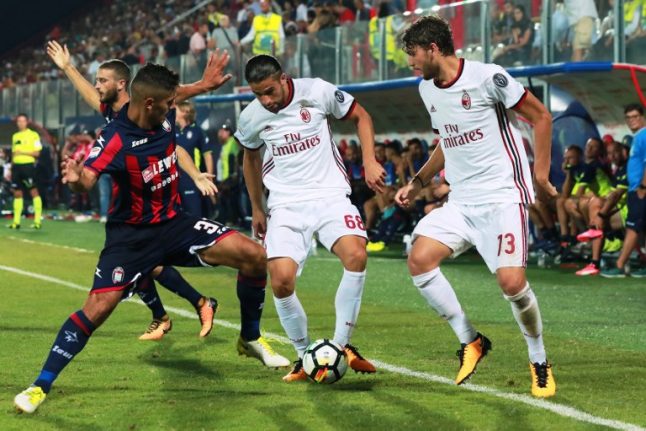 Left in the shade by Juventus for the past six seasons, both Inter and Milan are hoping to turn the tables and challenge for the scudetto on their way to claiming one of four Champions League places.

And neither of the San Siro giants disappointed on their way to going joint top of the table with Juventus, Napoli, Chievo, Sampdoria and Roma also sitting on three points following opening day victories.

Icardi bore the brunt of the blame for much of Inter's disastrous campaign last season, which left them in seventh and out of Europe.

But at a packed San Siro and under the watchful eyes of new Inter coach Luciano Spalletti, the Argentina international made amends with a confident first-half brace that included a sixth-minute penalty after he was caught by Fiorentina defender Davide Astori on the edge of the area.

Icardi doubled Inter's lead when he glanced a header past 'keeper Marco Sportiello on the quarter hour as the hosts took command.

“They gave it everything for each other and really went out to win this game,” said Spalletti, who was awed by the sight of 50,000 fans having spent two seasons at a sparsely-attended Stadio Olimpico with Roma.

“Even when we arrived on the team bus it was packed. This is a strong signal (from the fans), and one the players have to assimilate.”

Fiorentina emerged revived for what proved to be a tighter second half, notably coming close with Khouma Babacar on the hour then Jordan Veretout, who hit the post in the 78th minute.

But Inter put the match beyond reach when Ivan Perisic dived to meet Joao Mario's cross to head past Sportiello.

Federico Ceccherini saw red for bringing down Milan youngster Patrick Cutrone and Kessie, who signed from Atalanta in the summer, stepped up to hit his maiden Rossoneri goal from the penalty spot on six minutes.

Teenager striker Cutrone, who has been linked with a loan move to Crotone, doubled the visitors' lead on 18 minutes with a glancing header from Suso's incisive cross that beat Alex Cordaz at his near post.

Cutrone repaid the favour by setting up Suso for a third on 23 minutes.

Juventus, the six-time consecutive champions, had led the way on Saturday firing three unanswered goals past Cagliari in Turin. Napoli, who won 3-1 at Verona also on Saturday, sit fourth.

Sampdoria striker Fabio Quagliarella hit a goal in either half in a 2-1 win over league newcomers Benevento.

Fellow promoted side SPAL, back in Serie A after 49 years, held on to earn a point at Lazio, while at Udinese former Milan midfielder Valter Birsa hit a 54th minute winner as Chievo stunned the northerners 2-1.

Roma, who finished only four points behind Juventus last term, gave Eusebio Di Francesco his maiden win as coach, the former Sassuolo handler having tasted title success with the Giallorossi as a player in 2001.