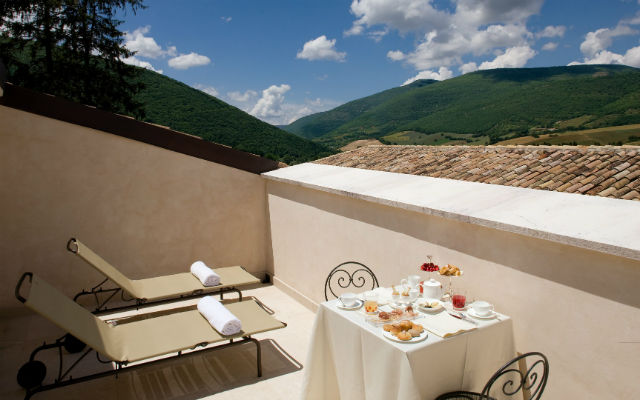 Parts of the town centre are still pulverized and many of its residents still live in temporary accommodation.

Yet only a few hundred metres away is the newly-crowned best luxury tourism hotel of the year, Palazzo Seneca.

The hotel was named Best Hotel of 2017 at the Virtuoso Tourism Awards ceremony on August 16th in Las Vegas.

“This award recognizes a beautiful part of Italy that has so much to offer and needs tourists as never before,” said Virtuoso travel advisor Julia Kostina of Vancouver, British Columbia, in a statement after the awards.

Palazzo Seneca's achievement is highlighted by the fact that large parts of the area were damaged in last year's earthquake in Norcia, the largest magnjtude quake for 30 years in Italy.

“Tourism has been strongly affected by the earthquake. For months the area did not have tourists because there were no open structures. We were the first hotel to reopen in the Old Town,” Federico Bianconi, co-owner of the Palazzo Seneca, told The Local.

Bianconi added that the hotel had no guest reservations when it reopened – hardly surprising given that most of the town is still in ruins.

“There is still no reconstruction,” Bianconi confirmed. “Rubble is still being removed and buildings that are in danger of collapse are being secured.”

The hotel itself was not majorly damaged in the earthquake. It reopened to the public on April 29th this year. Besides 24-rooms, the hotel can also a boast a wellness centre and a restaurant with views over the Umbrian hills. A collapsed house near the town of Norcia, in central Italy, after the October 30, 2016, earthquake. Photo: Filippo Monteforte/AFP

The Italian famers' association Coldiretti had predicted a total collapse of the tourism sector in and around Norcia after the October 2016 quake.

Citing the 220,000 nights a year spent by tourists in the region before the huge earthquake, Coldiretti predicted that “the risk is that this will be wiped out completely by the earthquakes.”

Bianconi says bookings are down 50-70 per cent compared with the same period last year at the 24-room Palazzo Seneca. However, VIP guests such as “footballers and other sporting and entertainment figures” continue to frequent the hotel.

“We made it clear to everyone that we would remain, to continue to believe in Norcia and to create work and excellence. In our hotel and in the restaurant we use the best products of our land: being open means creating work, making the local economy start rolling,” co-owner Vincenzo Bianconi told La Stampa.

The brothers themselves slept in a caravan for four months and ate at the local food bank, according to the same report, before working hard to reopen the only hotel in the Umbrian region that can boast a Michelin star, according to Italian national news agency Ansa.

More than 3,000 people lost their homes in the 6.6 magnitude earthquake in Norcia.