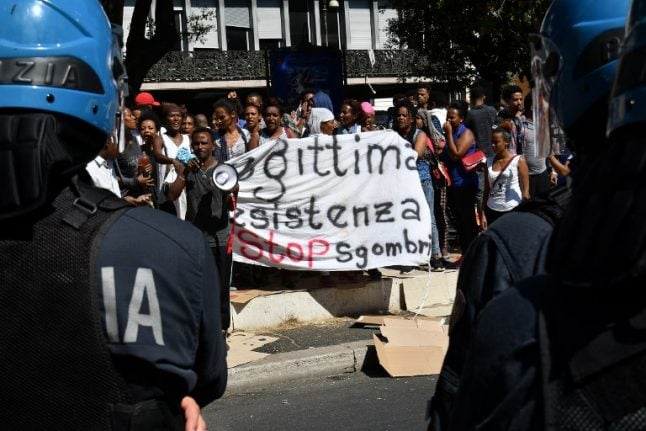 More than 800 people of mainly Ethiopian and Eritrean origin were forcibly removed from a building in Rome on Saturday, August 19th, leading to subsequent clashes between security forces and the evictees.

Four hundred of the tenants abandoned the squatted building while at least 100 set up tents in a square beside it and remained for five days, apparently to protest the lack of available accommodation alternatives.

On Thursday August 23rd, violent clashes ensued between police armed with riot gear and migrants, who threw stones and other objects – according to Corriere della Sera – when police cleared the square.

At least 13 of the evicted people, mainly women, were injured in the clashes, according to aid organization Doctors Without Borders, who reportedly treated the wounded.

(Tweet: “There wasn't a single ambulance in Piazza Indipendenza. Only the MSF team were treating the injured”, Stefano, MSF doctor.)

The police's use of water cannons and other heavy-handed tactics in the incident has been met with widespread condemnation from a cross-section of Italian society. Repubblica reported that at least 35 children, as well as pregnant women and sick patients, were caught up in the violent clashes.

In one video, an officer is heard shouting “They need to disappear, it's their problem. If they throw anything, break their arms,” as he chases people across a square.

UNICEF's Italy spokesman Andrea Iacomini said children remained “terrified” after the incident and condemned authorities in Rome for failing to offer an alternative for the 800 or so migrants, most of whom reportedly have the legal right to remain in Italy and are employed.

UNICEF'S Iacomini called the incident “a crisis of management, not a crisis linked to migration.”

Eritrean activist and 2015 Nobel Peace Prize-nominated Mussie Zerai said the building had been occupied since 2013 by migrants who had found no alternative place to live after being granted legal documentation.

Zerai added that authorities had plenty of time to find alternative accommodation before throwing the 70 or so families into the street.

Activists like Zerai and Iacomini argued that such last-minute evacuations are endemic of a system that takes a short-term view to issues linked to migration without proposing “structural solutions.”

UNICEF said the evictions would disrupt work and school for many families, a counter-productive move to integration, it argued.

Roberto Giordano, regional head of Italy's oldest and largest labour union, Cgil, said the evictions were a knee-jerk reaction, “an umpteenth intervention adopted more to respond to emotional solicitations than to a real project of relocation and inclusion,” Giordano told media.

Protests for and against the evictions, ordered by a Rome court, have been held in recent years.

The head of Rome Mayor Virginia Raggi's Movimento 5 Stelle party, Luigi di Maio, justified the evictions in a TV interview, arguing that the migrants had been offered alternative accommodation, which they had refused.

Di Maio expressed sympathy for legitimate refugees and said adequate accommodation must be found, while stressing that his party would not tolerate any form of violence against security forces.