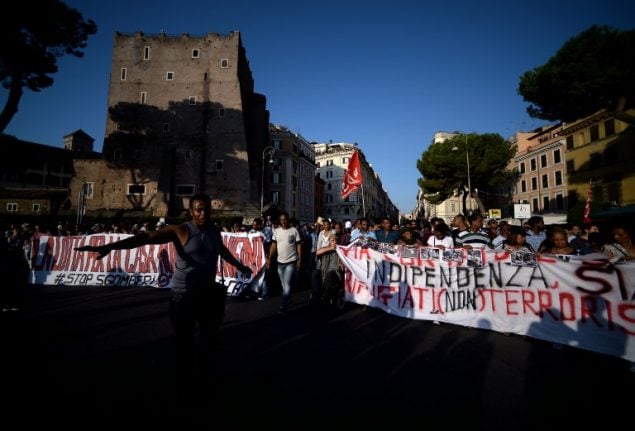 People evicted from a building in Rome hold a protest on August 26th. Photo: Filippo Monteforte/AFP

On Monday, Italian daily Repubblica reported that 600 empty buildings in various Italian cities had been identified by Minniti's team as potential places to relocate people, many of whom are migrants, who are evicted from illegally occupied buildings.

Minniti has also put forward the idea that properties confiscated from the mafia could be used as relocation centres.

The new guidelines are in response to the eviction of 800 migrants from a building in Rome ten days ago, that resulted in clashes between minority communities and the police.

On the morning of August 19th, police rushed into the building near Rome's Termini main train station, giving the 800 people inside a mere 15 minutes to vacate.

The building had been peacefully occupied since 2013 by mainly refugees and asylum seekers from Eritrea and Ethiopia, some in the country for as long as 15 years.

“I left everything behind,” a 30-year-old refugee told AFP on condition of anonymity.

On Thursday, authorities returned to evict the remaining people, using water canons and batons to forcibly remove the hundred or so refugees still on the premises.

The violence quickly escalated, as the squatters responded by throwing gas canisters and rocks at police.

Top cardinal Pietro Parolin later condemned the violence “on both sides”, while images of the clashes went viral in Italy.

One video which sparked outrage showed an official saying: “Those people have to disappear, too bad for them. If they throw something, break their arm”.

UNHCR urged Italian authorities to “find an immediate solution for the people currently sleeping under the stars and ensure adequate integration measures for those with a right to international protection”.

But relocating the Rome refugees has proved problematic. Italian authorities have proposed to relocate the refugees to housing about 75 kilometres (50 miles) from Rome, which would delay enrolment for children already registered in Roman schools.

And the city's leftist mayor has opposed the relocation, saying he has already welcomed 40 asylum seekers in a town of 3,100 people. A demonstrator holds a banner reading “from my Africa you take all” as the Movement for the Struggle for Housing and evicted people demonstrated in central Rome on August 26th, 2017. Photo: Filippo Monteforte/AFP.

As it has become harder for such migrants to reach other European countries, Italy's reception facilities have come under strain and the centre-left government, facing elections next year, is under pressure on the issue.

Interior Minister Marco Minniti, who has ultimate responsibility for the initial eviction, has recently overseen a series of controversial moves aimed at ending the crisis.

These include steps to curb the activity of charity and other privately funded boats rescuing migrants in the Mediterranean and Italian naval support for Libyan coastguard efforts to intercept boats headed for Europe.

But Italy has proven to be a stable country for refugees and asylum seekers – 40 percent of whom are approved for a residence permit though thousands still wait for a decision. Eritrean women shout slogans as the Movement for the Struggle for Housing protest in central Rome on August 26th. Photo: Filippo Monteforte/AFP.

Once approved, refugees go through a six-month integration process where they learn Italian and are offered job and education resources.

But many find themselves on their own because there aren't enough places available. And those who do manage to find jobs in a country with 37 percent youth unemployment may not be able to find adequate housing.

“In Italy, we live like animals,” an Eritrean refugee told AFP on Wednesday last week after the building was partially cleared.

The 28-year-old, who requested anonymity, railed against EU rules that prevent him from joining family in Sweden or in Belgium.

Rome Mayor Virginia Raggi blamed the current immigration situation on “years of negligence,” adding that the “absence of serious national policies” has “created a war between poor people”.