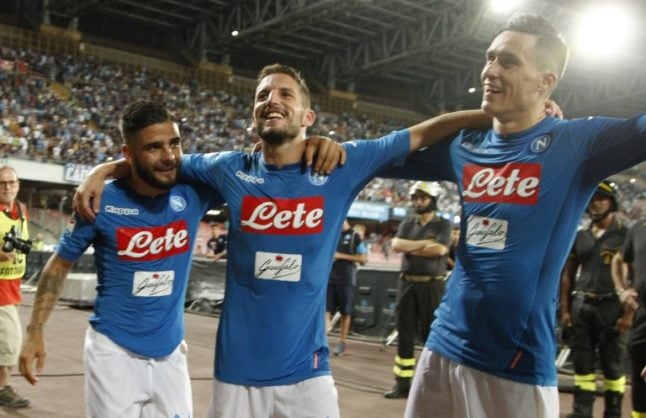 Piotr Zielinski hit a second-half screamer as Dries Mertens inspired Napoli to a 3-1 win over Atalanta on Sunday, while newcomers SPAL claimed their first goals and first win since coming up to Serie A.

Looking to keep pace with six-time champions Juventus after a Paulo Dybala hat-trick pushed the Turin giants to a 4-2 comeback win over Genoa on Saturday, Maurizio Sarri's Napoli dominated Atalanta for long spells.

But after Bryan Cristante's header from an Alejandro Gomez corner stunned the San Paolo into silence on 15 minutes, it took until Zielinki's superb 56th-minute strike from outside the area for Napoli's confidence to return.

Napoli were transformed, with Allan chipping up a pass for Lorenzo Insigne to nod across the face of goal where Mertens volleyed home for Napoli's second.

That goal took the wind out of Atalanta's sails and Napoli secured the points with a fine passing move that saw Mertens set up Marko Rog with a deft touch to turn in at the far post from 10 yards.

Spanish forward Suso struck to hand AC Milan a 2-1 win over Cagliari as Vincenzo Montella's men made it two from two.

For the second week in succession, Milan youngster Patrick Cutrone welcomed a Suso assist, the Spaniard picking the youngster out at the back post on 10 minutes to guide the ball past Alessio Cragno.

Joao Pedro hit a 56th-minute leveller for the Sardinians. But Suso, a part of Montella's side before Milan spent close to €200 million ($239 million) in the summer transfer market, sealed the points with a superbly-hit free-kick.

The defeat put pressure on Fiorentina coach Stefano Pioli. Sacked by Inter three games before the end of last season, his new side now prop up the fledgling table.

Earlier on Sunday Andrea Belotti hit a stunning early candidate for Serie A's goal of the season as Torino romped to a 3-0 home win over Sassuolo. There was further drama with league newcomers SPAL hitting their first Serie A goals in nearly 50 years, and claiming their first win of the campaign, with a 3-2 defeat of Udinese in Ferrara.

Strikes by recent signing Marco Borriello and Manuel Lazzarri, who has been with the club since their days in Serie D, had SPAL 2-0 up by the interval.

Udinese saw goals from Bram Nuytinck and French veteran Cyril Thereau, with an 87th-minute penalty, pull them level late on. But Luca Rizzo, who had come off the bench, stunned the visitors with a 94th-minute winner.

Borriello's opener meant he equalled a Serie A record of scoring for 12 different top flight teams, but he said: “We want to fight for our top flight survival, and as the club's striker it's up to me to hit double figures.”

On Saturday Argentina forward Mauro Icardi starred with a brace as Inter underlined their title pretensions with a 3-1 win over Roma.

The hosts, who saw coach Luciano Spalletti move to Inter in the summer, hit the woodwork twice before half-time and once again in the second half where Icardi then Matias Vecino found the net for the visitors.

“Roma played well, they were unlucky hitting the woodwork so often, but sometimes luck goes the way of the side which has the courage to do the running,” said Spalletti.

“We, too, made mistakes but we kept digging away, we never stopped pouring forward and in the end we were repaid.”