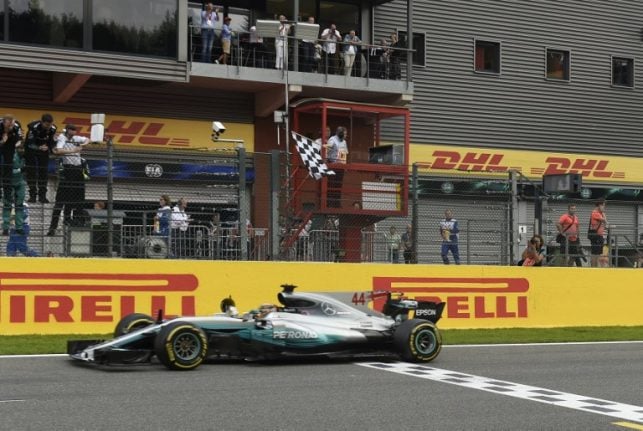 As four-time champion Vettel goes in search of his first win on Ferrari's home track in Sunday's classic high-speed charge, his nearest rival will be hunting a third victory in four years at the Autodromo Nazionale.

Hamilton has won the Italian race three times overall and secured pole each of the last three years, a record that has encouraged him to believe he can secure another vital victory.

He will attempt to extend that to four and, after equalling Michael Schumacher's all-time record of 68 in Belgium, deliver his 69th pole.

If he succeeds, and wins, the Briton will close the seven-point gap between him and the German and lead the title race for the first time this year.

He currently has five wins to Vettel's four, but knows, after last weekend's hard-fought victory, that nothing can be taken for granted.

“Ferrari have the better car and we have to do all we can to stay in front this time,” said Hamilton.

Following Vettel's decision to sign a new three-deal with Ferrari, Hamilton appears poised to remain with Mercedes, but the team have made clear ahead of Monza that they intend to delay contract talks until this year's championship is decided.

Hamilton is committed to Mercedes until the end of next year, but has suggested he is ready to make a long-term commitment to the team.

Mercedes team boss Toto Wolff has said he wants to retain Hamilton, but will wait until the championship is settled before any talks resume.

“Our relationship is very good and I think each of us appreciates what he has in the other one,” said Wolff.

“But this is not a topic we want to tackle now over the last remaining races of the season. It's an intense last third of the year and we'll get that over the line and then we'll pick up a discussion.”

The team is also expected to retain Valtteri Bottas who will have a major part to play in this weekend's contest as he seeks to secure another podium finish.

For Vettel, however, it is a key opportunity to retain the momentum in front of the tifosi on a weekend when Ferrari will celebrate the team's 70th anniversary.

“Monza is never a critical race for us,” said Vettel. “But I think it is the nicest race – we have a lot of support and the atmosphere is special. I am looking forward to it.”

Vettel claimed his maiden F1 win for Toro Rosso at Monza in tempestuous rain in 2008 and won again with Red Bull in 2011 and 2013. Since moving to Ferrari, he has had two podium finishes, but no win.

Red Bull's current drivers Daniel Ricciardo, fresh from his podium in Belgium, and Max Verstappen, facing penalties following his early retirement due to an engine failure, should also be strong contenders.

So, too, should be the two Force India drivers Sergio Perez and Esteban Ocon despite their collisions and post-race row last weekend when the latter accused his team-mate of risking their lives.

READ MORE: A horse-drawn chariot raced a Ferrari on a dirt track in Rome