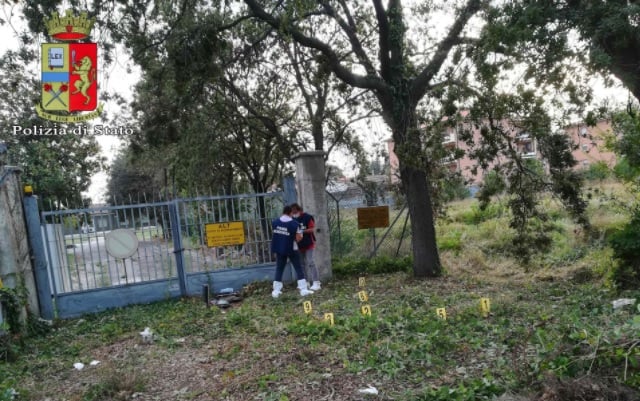 Forensic police working at the scene of the attack. Photo: Italian police

The man, a 20-year-old, was the last of the gang of four to be arrested and the only adult among the suspects.

“The last of the suspected Rimini rapists has been located and arrested,” said police in a statement on Monday morning. “The man was captured by police officers on a train to Milan from Pesaro.”

Rimini police chief Maurizio Improta said the arrest was “doubly satisfying” because the two officers who handcuffed the suspect were female. Improta called this “a symbolic gesture which gave justice to the victims of the violence”.

The below video was shared by police and shows officers escorting the suspect to a police car.

Pesaro is located 40km southeast of Rimini, a popular seaside resort on the Adriatic Coast where the attack took place.

The men allegedly raped a Polish tourist and badly beat up her husband on a Rimini beach, and later raped a transgender woman in a park.

Two other members of the gang, who are brothers aged 15 and 17, handed themselves into police in connection with the rapes on Saturday. Their father told the local paper Il Resto del Carlino he had recognized his sons in CCTV images shared by police, and told them to report themselves.

Shortly afterwards, a third suspect aged 16 was detained in a nearby town.

The three minors were previously known to police, but due to their age they are being held in a juvenile detention centre and their names have not been released.

The 20-year-old arrested on Sunday has been identified as a Congolese national who arrived in Italy as an asylum seeker in 2015. Following the rejection of his request for asylum, he was granted permission to stay in Italy until 2018 on humanitarian grounds, according to Italian media reports.