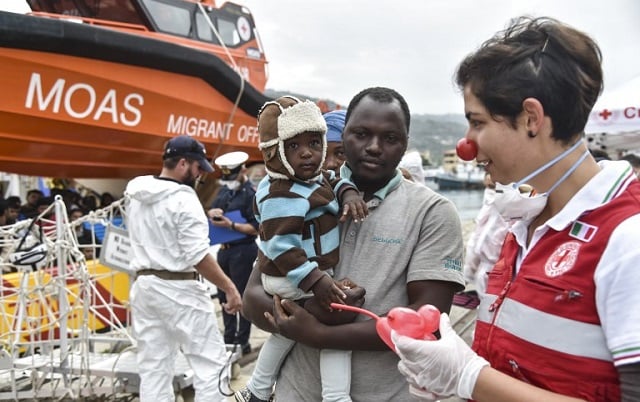 A volunteer welcomes a man and baby after disembarking from a MOAS ship. Photo: Andreas Solaro/AFP

MOAS launched its lifeline for those attempting the perilous sea crossing from North Africa to Europe in 2014, and said it had rescued and assisted over 40,000 children, women and men in the central Mediterranean since then.

But Italy's efforts to close the route – including controversial deals struck with Libya and transit countries – have created an “increasingly complex context” of which the Migrant Offshore Aid Station said it wanted no part.

“At the moment it is unclear what is going on in Libya to the detriment of the most vulnerable people there. Their rights should be safeguarded both in line with international law and in order to defend the principle of humanity,” it said.

READ ALSO: Road to Italy gets tougher for migrants

“MOAS does not want to become part of a mechanism where there is no guarantee of safe harbour or welcome for those being assisted and rescued at sea,” it added in a statement.

The organisation said it would transfer its resources instead to help Myanmar's Rohingya Muslim minority following a recent appeal by Pope Francis for their protection.

Nearly 90,000 Rohingya have flooded into Bangladesh in the past ten days following an uptick in fighting between militants and Myanmar's military in strife-torn western Rakhine state.

The impoverished region bordering Bangladesh has been a crucible of communal tensions between Muslims and Buddhists for years, with the Rohingya forced to live under apartheid-like restrictions on movement and citizenship.

The recent violence, which began last October when a small Rohingya militant group ambushed border posts, is the worst Rakhine has witnessed in years, with the UN saying Myanmar's army may have committed ethnic cleansing in its response.

MOAS said it would deliver “much-needed humanitarian assistance and aid to the Rohingya people” on the border between Bangladesh and Myanmar.

READ ALSO: 'Are we really the problem?' Migrant aid groups challenge ministers over response to crisis