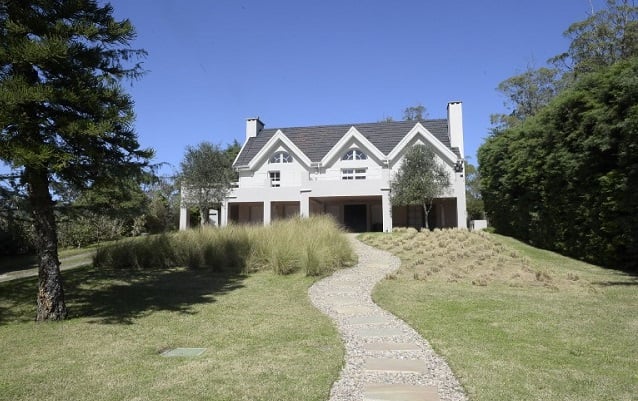 The home where mafia boss Rocco Morabito lived in Uruguay.

Morabito, dubbed in Italian media reports as the one-time “king of cocaine” in Milan, was arrested at a hotel in downtown Montevideo in a dawn raid by police on Saturday.

He had taken a room in the hotel while he looked for new lodgings in the Uruguayan capital after he had fought with his wife, his lawyer Alejandro Balbi said.

Local media said registering for new accommodation would have helped expose Morabito, who had been on the run for 23 years.

Now Uruguay authorities are investigating how he managed to quietly live in the resort town of Punta del Este for the past 13 years without being detected. So far their investigation has found that he had obtained Uruguayan residence papers after presenting a Brazilian passport in the name of Francisco Capeletto in 2004.

Until their recent separation, Morabito had lived with his wife – an Angolan national with a Portuguese passport named as Paula Maria De Oliveira Correia – and their daughter, according to the interior ministry.

By all accounts, he lived a quiet life in Punta del Este, a resort known as a playground for South America's rich about 90 minutes drive north of Montevideo. However, last February he threw a big coming-of-age party for his daughter who was turning 15 – a tradition in Uruguay – inviting classmates and their parents to one of the town's trendy venues.

It seems the Uruguayan authorities had begun to take notice around then. The interior ministry said his arrest was part of a police operation code-named Calabria which began in March.

Morabito, a capo with the Calabrian 'Ndrangheta, Italy's most feared organized crime gang, is being held in a Montevideo prison, accused of forging identity documents, pending the arrival of an extradition request from Italy.

The Italian justice ministry said extradition documents are being prepared. Morabito's family had been renting a house in a well-heeled part of Punta del Este since last June, the owner of the property Daniel Puig told AFP.

Real-estate broker Puig met Morabito three years ago when he sold him a 600-hectare country estate with a Tuscan-style farmhouse located some 40 kilometers from Punta del Este. The family lived there until last year.

READ ALSO: How the brutal murder of an anti-mafia hero marked a turning point for Sicily Puig and other Punta del Este residents were stunned to learn of the real identity of their acquaintance.

“He's not a drug dealer type, someone who goes out to restaurants, having a luxury car. He was low profile,” Puig said. Morabito even drove around in a “super modest Chinese car.”

“He was a good person. He lived for his daughter,” he said.

According to a man who worked for the family, Oliveira was an enthusiastic buyer of artworks, and the estate had many paintings, dinnerware and expensive objects.

Morabito, on the other hand, “liked to cook. The kitchen was full of spices,” said the man, who wished to remain anonymous.

Another neighbor described Oliveira as “an elegant lady, she seemed high-class. She wasn't nouveau riche. And she didn't speak about him.”

Oliveira has made no comment and has reportedly taken refuge in a hotel with her daughter.

Morabito arrived in trendy Milan from his hometown of Africo in Italy's poor southern region of Calabria at the age of 23, and quickly carved out a reputation as the city's “king of cocaine”.

Nicknamed 'U Tamunga' in reference to a German military vehicle, the Dkw Munga, in Milan the young Morabito became a charismatic figure who frequented bars and parties, according to Italian press reports.

He quickly came to the attention of Italian anti-Mafia investigators and they regularly tracked him delivering suitcases filled with millions of lira to Colombian drug traffickers in a Milan piazza.

Police finally moved in on his birthday as he made what would be his last delivery, in October 1994, but the capo managed to escape.

The following year he was sentenced in absentia to 28 years' imprisonment for mafia association and drug trafficking. Later the sentence was extended to 30 years.