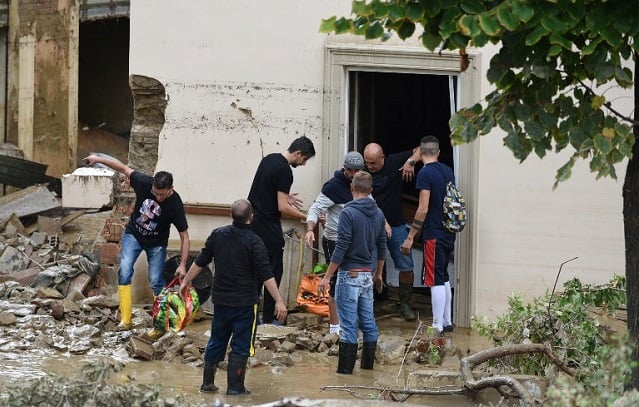 Four people from the same family were found dead in a flooded house in the city, where 40 centimetres (16 inches) of rainfall in four hours transformed streets into rivers and washed away cars.

The victims were a little boy, his parents and his grandfather, all found in a basement apartment, local daily Il Tirreno said.

The grandfather, who lived on first floor, had managed to rescue his three-year-old granddaughter from the basement but died when he went back to try and save his four-year-old grandson and the others, it said.

Images of the house showed a courtyard awash with mud and debris, with neighbours looking on in shock as emergency workers moved in to recover the bodies.

'City on its knees'

Residents in other parts of the city could be seen sweeping water out of their homes and piling up ruined furniture on the street, while in another courtyard a red delivery van had been flipped almost vertical by the rushing water.

A fifth body was found in an area devastated by landslides, while a sixth was found in a nearby hilltop neighbourhood, fire services said.  A seventh person was killed in a road accident, though it was not yet clear whether it was due to the weather.

Two other people were still believed to be missing, and continued rainfall was hampering the search. Aerial images showed large swathes of the region underwater.

“The situation is very difficult, it's critical. The city is on its knees,” Livorno mayor Filippo Nogarin said. He said the government had underestimated the danger, issuing a code orange alert for the region rather than red.

“We didn't expect this because the alert was orange. Then we woke up to this,” he said, adding that the death toll “may still rise” and could have been avoided entirely if they had known what was coming.

Italy's civil protection service said the code orange alert for Florence was still in place as the storms, which began in northern Italy overnight, swept down the country towards the south.

Some 200 shops and garages were flooded in Pisa, where fallen trees also closed roads.

Underpasses were closed in parts of the capital Rome, and seven tube stations were shut due to flooding. Images from La Repubblica television showed large garbage bins floating down flooded streets near the Colosseum.

“What's happening in Rome right now is unheard of… with a storm unleashing chaos. Once more the city has proved itself to be completely unprepared for rain,” said Italian consumer association Codacons.

Sicily sounded an orange alarm for Sunday night and Monday, particularly for the cities of Palermo and Catania.

Coldiretti, Italy's main agricultural organization, said the bad weather was aggravated by coming hard on the heels of a drought which had left the land drier than usual and unable to soak up the rains.


Rainfall in Tuscany in particular had been down 57 percent this summer, it said.

“The tropicalization of the climate is causing an increase in extreme weather events, with heat waves, heavy cloud bursts and violent hailstorms which are damaging the national agricultural production,” Coldiretti said.