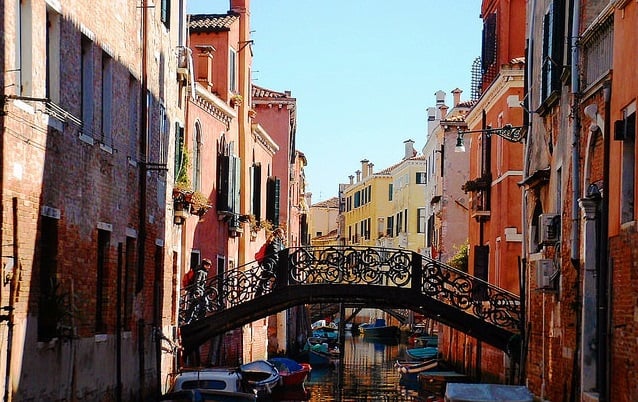 Natives of Venice have a strong sense of regional identity; this is clear in the support for independence movements, and the many organizations which have been set up to safeguard the culture and traditions of this beautiful city.

The Venetian language is an important part of this identity, and most of the five million people living in the Veneto region understand it. A man wears a T-shirt reading '100 percent Venetian' during a protest against overcrowding. Photo: AFP

At one point, Venetian was a strong contender to become the official national language of Italy, thanks to Venice’s cultural and economic prestige as a city, and the fact that important literary works had been written in the language. And although Florentine was ultimately chosen as the basis for Standard Italian, Venetian remains one of the most widely spoken Italian languages.

As well as Veneto, you’ll find it spoken in the neighbouring Friuli-Venezia Giulia region, some parts of Slovenia and Croatia, and even in parts of Brazil, Mexico, and Argentina where Italian immigrants settled several generations ago.

There are plenty of differences between Venetian and Italian (watch the video below), but there's no need to be intimidated by the dialect.

In fact, you almost certainly know some of its words already, which have been adopted by Italian and English. Both Italian ‘ciao’ and English ‘quarantine’ have their origins in the lagoon city, as well as plenty of water-related words, from 'gondola' (of course!) to 'lido'.

Here are nine more of the most useful and interesting words in Venetian.

Used instead of Standard Italian ‘via’, ‘calle’ is one of the words you’ll see most often in Venice, as it’s on so many street signs. Another word for street you’ll see is ‘fondamenta’, which refers to those walkways with buildings on one side and water on the other.

You'll also notice that 'campo' is used far more often than 'piazza' (square), which might seem strange if you've learnt that 'campo' means field. But the simple reason is that these squares were, in the past, large patches of grass or marshland. Food and drink gets very expensive very quickly in Venice, and your best bet for finding a bargain is to track down a 'bacaro'. These neighbourhood pubs are simple, usually with handwritten menus or none at all, and typically lacking in garish signage. You can also use the phrase 'far bàcara' (to go drinking).

READ ALSO: Twelve authentic spots to eat and drink on a budget in Venice

Tip: One of the best and cheapest 'bacari' is the Osteria al Ponte on the edge of the Cannaregio district.

Once you've found a 'bacaro', what do you order? 'Cicchetti', of course! These are small dishes, usually many of them involving seafood, which you choose from a counter – a bit like Spanish tapas. Expect to pay a few euros for each one, slightly more for those including meat. After a long day walking through the winding streets, you might say 'mi so straco!' (I'm tired). It's a borrowing from the Lombard word ‘strak’, which originally meant 'stiff', and you'll also hear 'stracco' in Italian as a lesser-used alternative to 'stanco', the usual word for 'tired'.

Italy has a lot of words for describing neighbourhoods: 'quartiere', 'contrada', 'rione', and 'zona' being the most common. But in Venice, the term 'sestiere' is the most popular, and it comes from the word for 'sixth' – six referring to the number of neighbourhoods. They are: Cannaregio, San Marco, San Polo, Castello, Santa Croce, and Dorsoduro. Always a useful word to learn, for those moments when you find yourself needing medicine, sun cream, or toiletries. Speakers of Germanic languages will recognize the Venetian alternative to ‘farmacia’, which comes from the Ancient Greek ἀποθήκη (apothḗkē).

Here's another example of how many different languages have been incorporated into Venetian – this one comes from Slovene 'podgana'. In Standard Italian it's more common to use 'topo' or 'ratto', but 'pantegana' is sometimes used to refer specifically to sewer rats.

You'll almost certainly hear this word if you're in Venice around carnival time, as the celebrations traditionally open with the so-called 'Flight of the Rat', when a giant model rat sails along the Grand Canal as part of the opening regatta.

The Venetian terma 'caivo' and 'caigo', come from the Latin term 'caligo' (fog or darkness), rather than 'nebula' (fog or cloud), which developed into 'nebbia' in Standard Italian. If you're in Venice in winter you're likely to experience strong misty fog, which is a pain if you're navigating a boat on the canals, but good news if you want to take atmospheric pictures. This Venetian word has a strange history. In the early 19th century, Venice was ruled by the Austrian Empire, so some coins were in circulation with the German term 'Scheidemünze' (literally 'divisional coin') written on them. It then entered the Venetian dialect with the local pronunciation to mean 'money' in general, and is still in use today – though it's not as common as it once was.

The article was first published in September 2017.