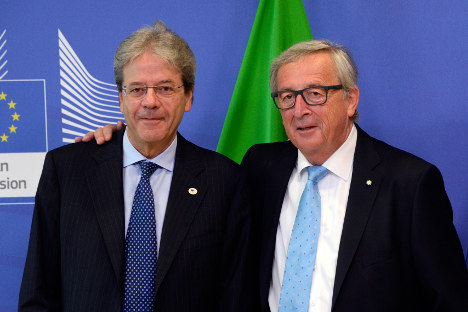 Italian Prime Minister Paolo Gentiloni, speaking at a Greek-Italian cooperation summit, said his country had been in favour of such a project for years.

But “a finance minister must create opportunities”, he said in translated remarks at a news conference, “it is not enough to create a job”.

In his annual state-of-the-union speech, Juncker on Wednesday proposed that the EU create its own Europe-wide finance minister, a big step towards deeper integration of the eurozone.

The proposal matches a similar demand by French President Emmanuel Macron, who says he believes that the eurozone needs stronger institutions in order to avoid shocks such as the debt crisis or Brexit.

Gentiloni called for “concrete steps” towards strengthening economic and banking cooperation in Europe, saying “big opportunities” were coming the EU's way in those areas.

But he said democratic mechanisms were needed to accompany any future eurozone finance minister post, and the “political and economic intentions” behind such an appointment had to be clear.

Greek Prime Minister Alexis Tsipras told the same news conference that there was no need for any finance minister if the job was simply to watch over compliance with eurozone convergence criteria.

“A finance minister who would just be a policeman punishing unruly members would bring nothing new to the table,” he said.

Juncker on Wednesday also called for expanding the eurozone beyond the current 19 member countries, with the creation of a special agency to give technical and financial help, a proposal that eurozone member Austria rejected outright on Thursday.

“I consider this concept to be badly thought-out,” Chancellor Christian Kern told the Oe1 broadcaster.

He said the EU first needed more cooperation on the economy and against tax fraud, as well as in the creation of social and wage standards.

“Before all of this is achieved, any eurozone enlargement makes no sense because it will worsen the problem areas,” he said.

“We have seen what happens when you allow countries to join that meet those criteria in only a very limited way. Greece is the prime example of this. At the end of the day, all you do is worsen the problems without strengthening European cooperation.”

In his speech, Juncker, who said the EU was emerging from years of crisis, also called on the EU to conclude more trade deals, create the post of EU president, expand the passport-free Schengen area, take the lead in the fight against climate change and keep a closer watch on attempts by foreigners to take over strategic European companies.