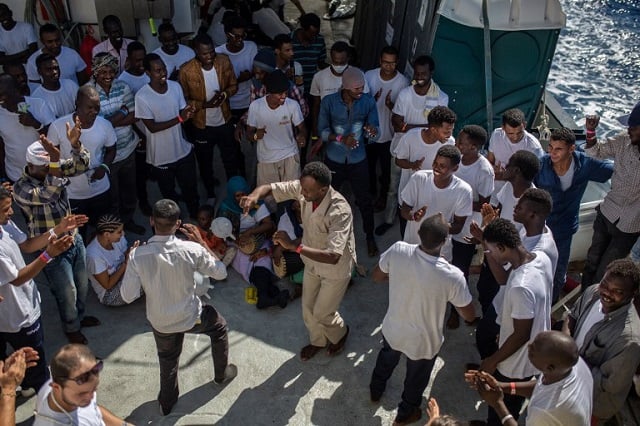 Migrants dancing on deck as they approach the Sicilian port of Pozzallo. Photo: Angelos Tzortzinis / AFP

Though the numbers attempting the dangerous journey have dropped off significantly in recent months, these new rescues indicate the route is still very much open.

The tally was the highest reported out of Libya for a one-week period since mid-July saw a dramatic fall in the number of migrants trying to reach Europe.

Six years since a revolution and NATO intervention that toppled dictator Moamer Kadhafi, violence-wracked Libya has become a key gateway for clandestine migration to Europe with nearest European country Italy bearing the brunt of the fallout.

Most of the latest rescue operations in Libyan waters were staged off the cities of Zawiya and Sabratha, Libyan navy spokesman General Ayoub Kacem said in a statement.

He added the Libyan coast guard rescued 2,082 migrants in nine operations from Monday-Friday – adding one woman had died – while Saturday saw a further 1,047 people picked up.

Italy, the closest and main destination, has recorded 6,500 arrivals since mid-July, barely 15 percent of the figure for the same period in the past three years.

Even so, the past week alone has seen around 2,000 rescues according to NGOs and media reports. Italian daily La Stampa on Sunday reported the arrival in Sicily of 589 migrants on a boat chartered by British charity Save the Children, which could not be immediately reached for comment.

A further 200 people were picked up off the Italian island of Lampedusa and the Sicilian coast. One Irish patrol vessel, the William Butler Yeats, disembarked on Sunday some 550 migrants at the eastern Sicilian port of Augusta as well as three dead bodies, two women and a child, who the Red Cross said was a three-year-old Cameroonian.

That group had been drifting off the Libyan coast in inflatable dinghies although the Irish naval service said on their Facebook page several had been picked up from the sea as their makeshift craft disintegrated.

Italian vessel Zeffiro meanwhile said it had picked up 135 African migrants off Messina and the SOS Mediterranean NGO had Saturday brought 371 people to port at Trapani, northwestern Sicily.

In July, Italian Interior Minister Marco Minniti proposed a pact to combat human trafficking during a visit to Tripoli to meet mayors of cities affected by the waves of arrivals.

“The Italian experience of the past few months shows what can be done. There are fewer arrivals and also fewer deaths at sea,” said Gentiloni, despite the spike over the past week.

READ ALSO: Italians debate whether Italy-born children of migrants should get citizenship