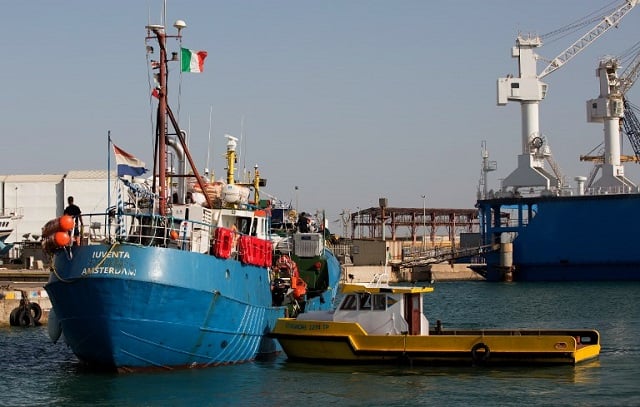 Humanitarian group Jugend Rettet went to court to demand the immediate release of its 33-metre boat the Iuventa, which was seized on August 2nd on the island of Lampedusa.

A judge in Trapani, Sicily will rule on the request for the vessel's release by Friday.

The high-profile seizure came as Italy moves to regulate the activities of NGOs operating off Libya against a backdrop of claims their presence was encouraging migrants to try to reach Europe and making life easier for traffickers.

The seizure was ordered by an investigating magistrate based on testimony from two former police officers working as security on another boat patrolling waters off Libya to help save refugees and other migrants trying to cross the Mediterranean on rickety dinghies and converted fishing boats chartered by traffickers.

The pair have testified, with the support of photographs, that they witnessed Iuventa crew members talking to presumed traffickers and that, on at least one occasion, the NGO's staff had towed a wooden boat from which migrants had been rescued back into Libyan waters, making it available for reuse by traffickers.

The NGO provided its side of the story on Tuesday, notably detailing contacts between the crew and the Italian coastguard, which coordinates rescue activity in the area.

“All the evidence collected has been presented and interpreted in an erroneous manner,” said spokesman Philipp Kuelker, highlighting reported links between the key witnesses and far-right groups.

He said the Iuventa's position had been in line with instructions from the coastguard and that the boat supposedly delivered back to traffickers was only towed a short distance to get it away from the NGO's boat.

The alleged traffickers seen talking to the Iuventa crew members were in fact armed criminals who frequently attempt to pick up outboard motors after or even during rescues.

“We demand the immediate release of our ship, the dropping of any charges against the organisation or crew members and that those responsible for this despicable smear campaign publicly apologize…” Jugend Rettet said in a statement.

Founded by students in 2015, the organization, whose name translates as “Youth Saves” took part in rescues of more than 14,000 people between July 2016 and the seizure of the Iuventa last month.

READ ALSO: Lampedusa's anti-migration mayor says the island is 'about to collapse'