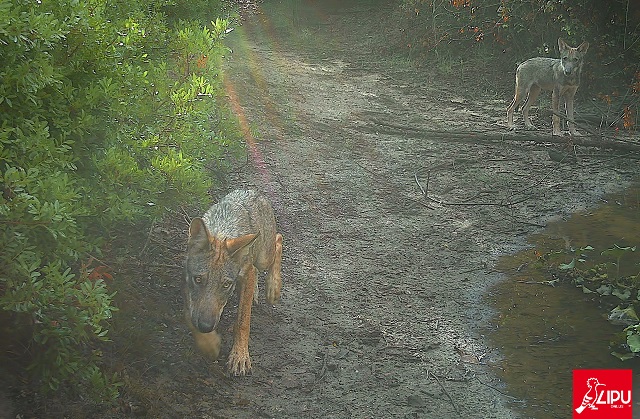 And now, for the first time in over 100 years, newly-born wolves have been spotted living just outside the Italian capital.

Hidden cameras in the Oasi LIPU Castel di Guido, a wildlife sanctuary spanning 180 hectares, have snapped pictures of an entire family of wolves: mother, father, and two cubs.  The male adult has been named Romulus by researchers, a nod to the city's legendary founder, and since he was first sighted, scientists have been studying the animals through video footage and analysis of excrement to determine their diet.

“We were very surprised!” a spokesperson from LIPU said, speaking to The Local about the birth of the cubs. “We first spotted the [adult] wolves in 2013, and this is the first time there have been cubs.”

She added that the creatures should not pose any danger to locals, because wolves are “elusive animals which keep themselves hidden”. The organization has offered advice to farmers about protecting their livestock from any attacks, but stressed that the wolves' diet is made up of 95 percent wild boar, and that abandoned dogs pose the greater risk to cattle.

The nature reserve is located close to the ring road that surrounds Rome, and the wolves likely made their way there from the area surrounding Lake Bracciano north of the capital, which has long had a wolf population. It's a case of “natural recolonization”, according to LIPU, without any human intervention: adult wolves typically move away from their pack when they reach maturity in order to find a new mate and territory.

The cubs were first captured on camera in summer this year, but researchers waited until the autumn to make the news public as they were unsure whether the animals would survive – only 50 percent of a wolf's litter typically reach maturity.

“It's very good news because in this area in recent years, we have had lots of wild boars, which have caused problems for farmers in the area. Wolves are a natural predator of boars, so this could help control the boar population,” the spokesperson explained.

The female wolf was pictured lactating, signalling the arrival of the cubs. Photo: Oasi LIPU

Rome authorities have considered sterilization of the wild boars following an increase in sightings and the death of a man in March after his scooter collided with one of the animals. Video footage has shown them in streets and residential areas as well as parks, possibly enticed into urban areas due to the capital's problems with waste management.

The Italian wolf population dropped to just 100 in the 1960s, but in 1971 they were declared a protected species and a ban on hunting them has allowed numbers to creep back up to an estimated 1,600. They live predominantly in the mountainous regions of the Appenines and the Alps.

However, the creatures are not popular with local farmers, with agricultural organization Coldiretti saying the number of attacks of livestock has risen sharply in recent years. In 2014, farmers in Tuscany illegally killed wolves and left the carcasses in public areas in protest at the damage to their cattle and property.

Earlier this year, the country mulled a controversial plan to cull five percent of the wolf population, a measure which was stopped following protests from environmentalists.

READ ALSO: A herd of 'rebel cows' has been living wildly in the Italian mountains for years