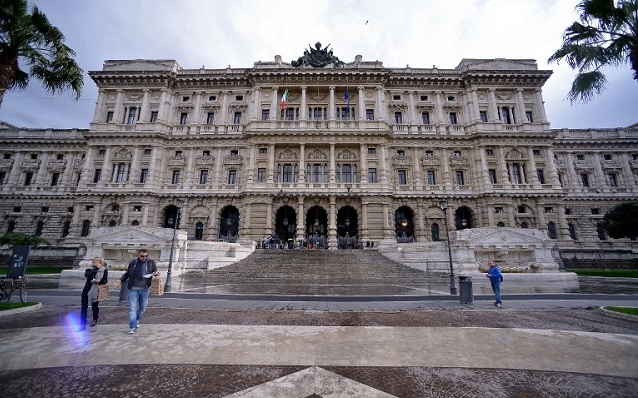 A view of the Supreme Court in Rome. Photo: Filippo Monteforte/AFP

In 2014, prosecutors called for the 57-year-old, A.T., to be sentenced to life in jail for killing his son and attempting to kill his ex-wife the previous year.

That sentence was confirmed by an appeals court in Trieste last year, but has now been overturned after Italy's highest court accepted the man's appeal on the basis that he was not related to his victim by blood.

A.T. stabbed the 19-year-old with a kitchen knife when the teen tried to defend his mother, who was also stabbed several times. The woman, aged 42, survived the ordeal but her son later died of his injuries.

But according to a report in Messaggero Veneto, the Court of Cassation, Italy's highest court, ruled on Thursday that A.T. should not face a life sentence following an appeal from the defendant, who formally adopted the son in his home country of Moldova.

The reason for the decision is an anomaly in Italian law.

In civil cases, including those related to family law and inheritance, for example, there is no difference between biological and adopted children. Italy's criminal court, however, makes a distinction between the two, and only applies an “aggravating factor” in homicide cases in which the victim is a blood relative of the killer.

Because of the decision, a new trial will now have to take place. The Court of Cassation stipulated in its ruling that the man should serve no less than 16 years in jail, according to the Messaggero Veneto.

Earlier this year, the European Court of Human Rights ordered Italy to pay A.T.'s wife damages of €40,000 in relation to the case, as The Local reported at the time.

“Italian authorities failed to protect a mother and son because they did not take prompt action on a complaint concerning conjugal violence,” the court said in a statement.

The woman had reported her husband's abusive behaviour to police multiple times, and the Strasbourg court said Italian authorities “underestimated the violence in question and thus essentially endorsed it”.

The man's alleged abuses against his wife included beating her and her daughter, forcing her at knifepoint to have sex with his friends, and multiple threats of violence.

At one point, she was taken in by a women's refuge, but after three months had to leave due to “lack of available space and resources”, the court said.

On the night of the stabbing, she had called the police after an argument with her husband and he had been taken to hospital in a state of intoxication.

After being discharged, police carried out an identity check on him as he was wandering along a street at around 2.25 am, but let him go home after an on-the-spot fine, approximately two and a half hours before he carried out the attack on his wife and son.

After realizing his son was dead, A.T. approached a night guard and told him: “I've killed my son, call an ambulance, it's my wife's fault”, court documents said.