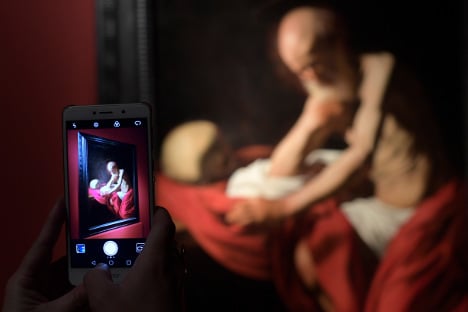 “Inside Caravaggio”, an exhibition that opens on Friday at Milan's Palazzo Reale, unites 20 of the Renaissance giant's most important works with X-ray and infrared images of them that offer visitors revealing insights into how he went about creating them.

The multimedia displays offer contemporary fans of the father of modern painting a glimpse into his idiosyncratic technique, the points at which he changed his mind and the modifications and adjustments he made to some of his most famous works.

Other highlights include “St. Francis of Assisi in ecstasy” (c.1597), borrowed from the National Gallery in London.

“It is a special exhibition,” said curator Rossella Vodret. “He was a fascinating figure who never ceases to surprise us.

“Apart from offering 20 Caravaggios, which is an exceptional figure for this artist, the displays allow you to get inside his head, to relive his creative process.”

In a portrait of St John the Baptist that is on loan from the Palazzo Corsini in Rome, the biblical figure is sitting and turning towards his right.

“It was not understood why he was in this position but with radiographic imaging we discovered that he was in fact turning towards a lamb, which is his iconic symbol but which the artist decided to paint over in the end,” Vodret said.

In “St Jerome in Meditation,” which usually resides in a museum at the Montserrat Monastery in Barcelona, the right leg of the elderly man was initially more exposed but finally covered up with a blanket.

The exhibition also offers a new perspective on Caravaggio's years in Rome, based on new research that dates the Milan-born artist's arrival in the city to 1596, four years later than previously thought.

“That means that the production of works thought to have taken eight years, were actually completed in four, and also that there is a a gap of four years, which he probably spent in prison after killing a man in Milan,” said Vodret.

Caravaggio was forced to flee Rome in 1610 after killing another man in a brawl and is thought to have died in Tuscany four years later, aged just 38.