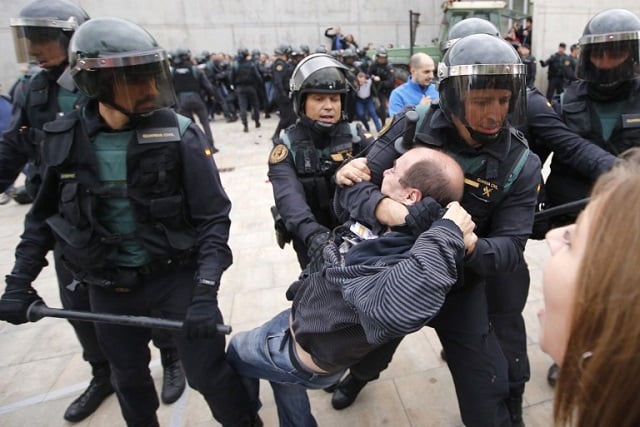 The regional referendums scheduled in Italy for later this month will see Lombardy and Veneto – two of the wealthiest regions – seek greater autonomy.

The governor of Veneto, Luca Zaia, had initially called for a vote asking Venetians if they wanted to secede from Italy, but after Italy's Constitutional Court blocked that plan, voters will now be asked if they want the region to receive “further forms and particular conditions of autonomy”. Both Lombardy and Veneto's governors belong to the far-right Northern League party, which is built on a platform of independence for Italy's northern regions, and whose leader Matteo Salvini has previously said he supports Catalonia's independence bid.

But on Sunday, Salvini distanced his party from the Catalan independence movement, noting that Italy's regional referendums, while not legally binding, have been organized legally, unlike the Catalan vote which was judged illegal by the Spanish government.

“Ours is a completely different choice from Catalonia,” said Salvini. “We have chosen the peaceful path, respecting the rules and managing it better. On October 22nd [the date of the Lombardy and Veneto referendums], there will be no police. ”

Throwing voters down stairs, kicking them in ribs, dragging by hair: This is what police did at a polling station in Catalonia this morning. pic.twitter.com/8N3moQlRUT

But despite criticizing the methods of the referendum organizers, Salvini also spoke out against the Spanish government for its heavy-handed response, saying “a government that uses violence to empty and close polling booths, using violence against children and the elderly, is shameful”.

Giorgia Meloni, the leader of the far-right Fratelli d'Italia party which is one of the Northern League's closest allies, appeared to criticize the pro-independence movement in a statement saying: “I see what is happening in Spain and I think: “Divide and conquer.” The ancient Romans explained it well: divide your enemies, weaken them, and impose upon them […] That is why I can't get excited about the efforts for independence or autonomy that would divide or weaken national states in Europe.”

No official statement was made on the referendum by Italian Prime Minister Paolo Gentiloni, who told journalists the week before the vote that he considered it “a question for Spain”, or Foreign Minister Angelino Alfano.

Other members of the ruling Democratic Party condemned the violence, with Piedmont deputy Piero Fassino saying on Twitter: “In Barcelona, they are digging a irreparable groove of distrust. Stop the downward spiral of acts of force. Only from dialogue can you get a shared solution.”

There was no mention of the referendum on the blog of Five Star Movement's co-founder Beppe Grillo, nor on his social media accounts or those of the party's newly elected leader Luigi Di Maio.

But one of the party's highest-ranking figures, Alessandro Di Battista, criticized the actions of the Spanish government and police as anti-democratic. “In Spain and Italy, corruption is tolerated, but a population deciding when, how, and why to vote is not. And they call themselves democracies!” he said.

“Mark Twain said, 'If voting made any difference, they wouldn't let us do it'. In fact when a vote could really make a difference, the so-called “democrats” don't let them. And this is happening everywhere. Not just in Catalonia,” Di Battista wrote in a Facebook post.

He went on to say that in Italy, established 'systems' blocked changes wanted by the people. “The media distracts, the political system creates new shameful laws, the criminal system rigs votes […] Italy's problem is the Italians,” added Di Battista.