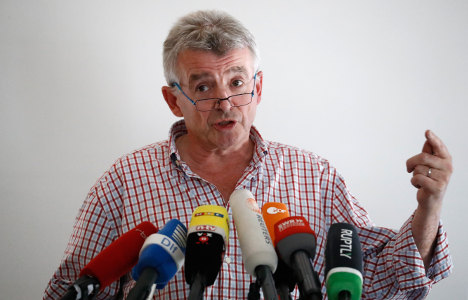 The beleaguered Irish low-cost carrier scrapped 20,000 flights across Europe between October and March after errors in rostering staff leave led to a shortage of pilots. The move is expected to impact over 700,000 passengers. More than 700 cancellations were for flights to and from Italy.

The civil aviation authority said that the process of sanctions against the airline for failing to inform passengers is underway.

The company said it would fully comply with Regulation 261, the EU law on compensation and assisting passengers hit by cancellations and delays, and that it was taking all necessary steps to re-accommodate all affected customers.

After weeks of controversy, CEO Michael O’Leary on Thursday apologised to customers and staff over the disruption, offering pilots huge pay-rises to entice them to stay with the airline after hundreds are believed to have decamped to Air Norwegian.

Ryanair also pulled out of bidding for Alitalia amid the mayhem, saying it would not move forward with its offer in order to “eliminate all management distractions”.

Ryanair has experienced phenomenal growth in Italy over the last decade, and now controls 24.3 percent of the market, compared with Alitalia’s 17 percent. The airline last year announced plans to invest €883 million in the country, creating 2,250 jobs and opening 44 new routes.