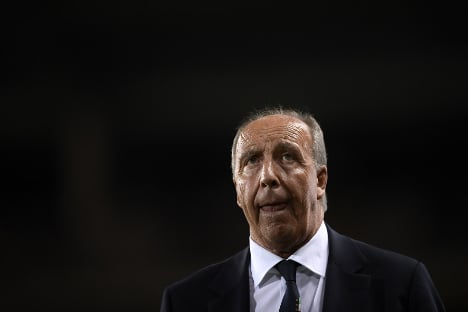 Aleksandar Trajkovski cancelled out Giorgio Chiellini's first half goal as the Azzurri left the pitch in Ventura's old stadium with whistles ringing in their ears.

“If Italy play like we did in the second half with Macedonia, we'll struggle in the play-offs,” said Ventura.

Spain qualified first in Group G by thrashing Albania 3-0 with Italy second but still not mathematically sure of even being one of the top eight runners-up to make the play-offs.

“The result is not positive, it is not what we wanted, nor what we expected,” said the former Torino coach.

“I think the whistles were deserved, even if I think you should never jeer the national side as a point of principle.

“We need to get the crowd on our side because they can help us. We have a match waiting for us in Albania (on Monday) before the play-offs and we'll go out there to play.

“The only thing that matters now is getting our energy back, recover a few players and go to achieve what this group deserves, which is a place in the play-offs.”

Veteran keeper Gianluigi Buffon — decked out in the new Azzurri blue kit for the 2018 World Cup – conceded the four-time world champions were still reeling from last month's rout by Spain.

“I think that the Spain defeat affected our confidence and it still left a mark on this match,” said the Juventus player.

“Maybe we thought that we're better than we are, even if a 1-0 win wouldn't have changed anything and a draw just extends a cycle that we need to get out of fast through pride, determination and a sense of responsibility.

“At this point we need a psychological turning point.”

The setback against 103rd-ranked Macedonia could also have a negative impact on Italy's world ranking — currently 17th – as they bid to ensure a favourable seeding for the play-off draw next month.

Chiellini added: “We're really frustrated. We are sorry for the fans, we understand them and we are as upset as they are, but I am sure they will support us when we need them.”

Amid the mounting injuries Juventus defender Andrea Barzagli limped off at the end of the first half with a muscular problem.

“I went off to avoid taking any risks,” said the 36-year-old.

The last time Italy had to go through play-offs was in 1997 on the road to the 1998 World Cup in France.