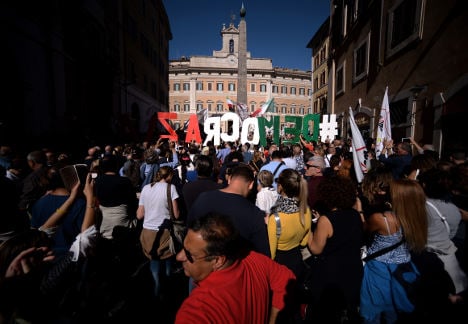 A majority of lawmakers in the Chamber of Deputies backed the ruling centre-left coalition in a vote of confidence designed to curtail further discussion on a draft electoral law that has been subject to parliamentary tractations for nearly three years.

The strong-arm tactics employed by Prime Minister Paolo Gentiloni sparked howls of outrage from the biggest opposition force, the populist 5 Star Movement (M5S), which could be disadvantaged under the proposed new system.

One of their senior figures, Alessandro Di Battista, called the law “a subversive act” and claimed that “only (former Italian dictator Benito) Mussolini did things like this.”

But Silvio Berlusconi's Forza Italia and the far right, anti-immigrant Northern League both joined the government in backing the new system, which is a hybrid of first-past-the-post and proportional election schemes.

Under the draft law, 225 deputies in the Chamber would be elected directly from seats in which they gained the most votes and a further 386 would come from party lists based on their percentage of the vote.

The system is seen as favouring established parties with deep local roots and well-known candidates, to the detriment of recently-founded M5S.

The confidence vote procedure is expected to see the electoral law adopted by the Chamber on Friday morning at the latest. It then requires approval by the Senate.

Several thousands M5S activists protested outside parliament Wednesday, chanting “Out”, “Shame” and “Honesty” against what they claimed is an anti-democratic, unconstitutional reform.

Giuseppe Pinna, 37, told AFP he had travelled from the Italian island of Sardinia to protest “a law designed purely to stop a party supported by a large number of Italians from governing”.

Latest polls put M5S neck and neck with Gentiloni's Democratic Party (PD) with the backing of around 27 percent of voters.

Forza Italia and the Northern League are both forecast to capture around 14 percent of the popular vote.

M5S has so far refused to contemplate forging alliances to form a government, while the PD governs with the help of allies from a centrist faction of former Christian Democrats.

As things stand, the PD will enter the fray with former premier Matteo Renzi, 42, as their candidate for prime minister while M5S are expected to name 31-year-old leader Luigi Di Maio as their figurehead.