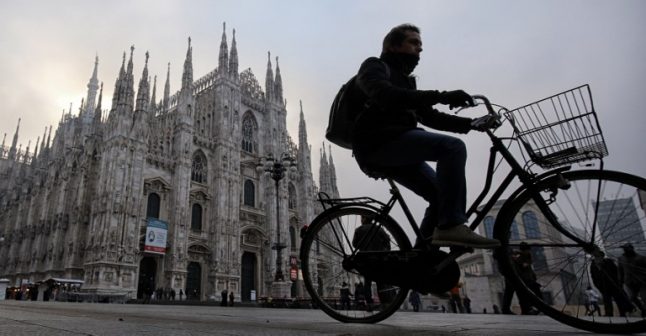 Milan is one of several Italian cities with an air pollution problem. Photos: Marco Bertorello/AFP

That’s according to environmental non-profit Legambiente, which released a special report this week detailing the scale of Italy’s pollution problems.

By mid-October 25 Italian cities had already exceeded the European Union’s standards for air quality, which specify that cities should have no more than 35 “bad air” days – when levels of PM10 pollution exceed micrograms per cubic metre of air – per year.

Almost all of the worst affected cities were in the north of Italy. Only Frosinone, south of Rome and an emerging centre of industry, falls outside Italy’s traditional “industrial triangle” in the north-west.

In January 2017 alone, nine Italian towns passed safe limits for air pollution on at least half of the days.

The situation has been exacerbated by months of extremely low rainfall and high temperatures well into autumn, which look set to continue until at least the end of this week.

It is however an improvement on 2015, when more than half of Italian cities – 48 of them – exceeded the EU’s air pollution limits, according to Legambiente. Frosinone was the worst offender that year with 115 bad air days.

Several Italian cities, especially in the north, have imposed restrictions on driving in certain zones and at certain times in a bid to lower emissions.

Italy has the highest number of premature deaths from nitrogen dioxide air pollution of any country in the EU, according to the European Environment Agency. The toxic gas, which comes mainly from diesel fumes, killed more than 21,000 people in Italy in 2013, the agency reported last year.

Unlike some other European countries including France and the UK, Italy has not set a target for banning the sale of new diesel vehicles.