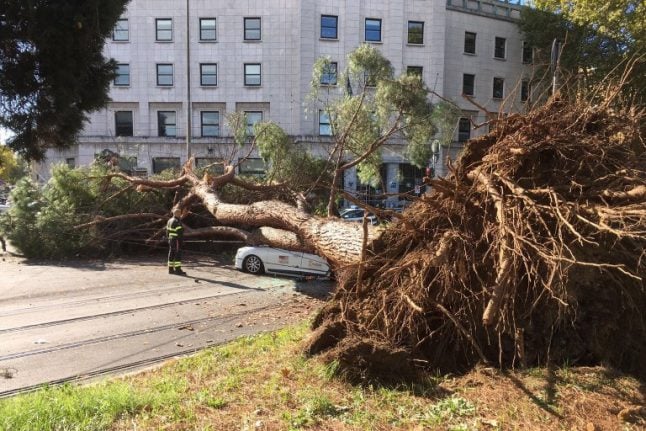 The tree hit the cab as it drove through Piazza delle Cinque Giornata in the centre of the city on Monday morning, crushing the top half of the vehicle.

The driver was taken to hospital. Two passengers, said to be tourists, escaped uninjured.

Two other vehicles were also hit by the falling tree, though not as seriously.

Only a matter of time before someone is killed by a falling tree in Rome. Thousands dying through neglect. Pic from ANSA today pic.twitter.com/5GH7yBsCpN

It’s at least the fourth such accident in Rome in less than six weeks: on October 19th, a 25-metre-tall pine fell in front of a supermarket in the north of the city centre, while on September 22nd a falling tree struck a car windshield not far from the scene of Monday’s accident. On September 13th another tree fell across a street in the same area.

Across town on Monday, La Repubblica reported, strong winds broke off tree branches that fell near the Ministry for Public Works and a bus stop in front of it. There were also delays on one of the city's train lines after a tree fell across the tracks.

“It is beyond an emergency.”

Rome’s council has surveyed 15,000 of the city’s trees and judges that around 3 percent need to be chopped down and many more pruned, according to the delegate in charge of environmental sustainability, Pinuccia Montanari.

“We have to do in a year what hasn’t been done in ten,” she told Ansa.

The trees cut down will be replaced with new ones, the council says.