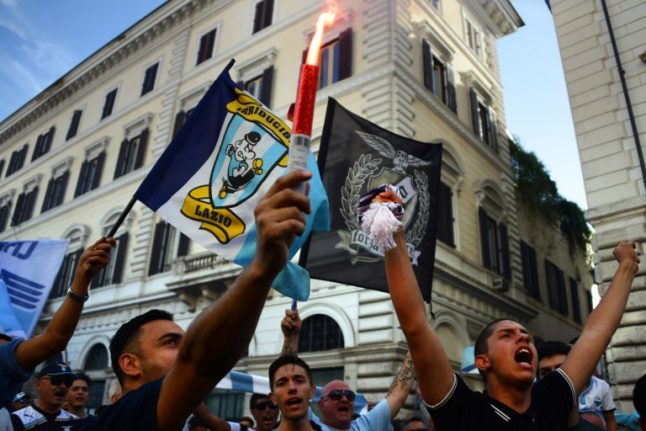 Meanwhile Lazio’s players are to wear shirts bearing the Holocaust victim’s face during their next pre-match warm-up.

The club’s management went into damage control on Tuesday after police in Rome said they were investigating offensive stickers found in the capital’s Stadio Olimpico after Lazio played there on Sunday.

Lazio’s chairman, Claudio Lotito, announced that the club would start a project to take 200 young people a year to visit Auschwitz, the Nazi death camp in Poland.

He was speaking from Rome’s Great Synagogue, where he laid flowers at a memorial for Holocaust victims, accompanied by some of Lazio’s players.

“Lazio will go to Auschwitz,” he told the cameras. “What happened must not be forgotten.”

Insisting that most of the club’s fans were not racists, he said: “No one can use Lazio this way.”

Lotito also ordered his squad to wear Anne Frank shirts during the warm-up for their match against Bologna on Wednesday night, Ansa news agency reported.

The club had considered temporarily adding the Star of David to their strip, as suggested by Italy’s former prime minister Matteo Renzi.

In addition extracts from Anne Frank's diary will be read out before all of Italy's mid-week fixtures, the Italian Football Federation said.

The Anne Frank pictures, which were found alongside anti-Semitic slogans stuck to barriers in the Lazio ultras’ section, drew fierce condemnation in Italy and abroad.

“There are no words to condemn such a shameful gesture,” said the director of the Simon Wiesenthal Centre in Jerusalem, Efraim Zuroff. “It is trivialization of the Shoah, transforming an inhuman tragedy into a simple squabble between fans.”

Anti-Semitism has long been a feature of Lazio-Roma rivalry. The Anne Frank image has been circulating among Lazio supporters since at least the early 2000s, alongside chants such as “AS Roma Juden Club” and “Auschwitz is your hometown, the ovens are your houses”.

Some Roma fans have proved no better, using slogans such as “Anne Frank supports Lazio”.

Lazio’s fans found themselves banned from their section of the stadium they share with Roma after they were heard chanting racist taunts at a rival club’s black players early this month.

The two-game ban forced them to sit in Roma’s section for their match against Cagliari last Sunday, which is where the anti-Semitic stickers were found.

The club will use all means to identify those responsible, Lotito said, including surveillance cameras.  Police and the Italian Football Federation are investigating.

But Lazio’s hardcore ‘Irriducibili’ fan group refused to distance itself, stating they were surprised by the furore.

“There have been other cases which, in our opinion, should deserve much more attention by newspapers and TV,” a statement read.

“We don’t distance ourselves from what we’ve done, we simply wonder why nobody takes our side when we are the victims of these alleged incidents.

“We wonder why nobody talked about our initiatives to remember the victims of terrorism. We think these moves are oriented to block and boycott Lazio’s growth, as they’re one of the best Serie A teams.”