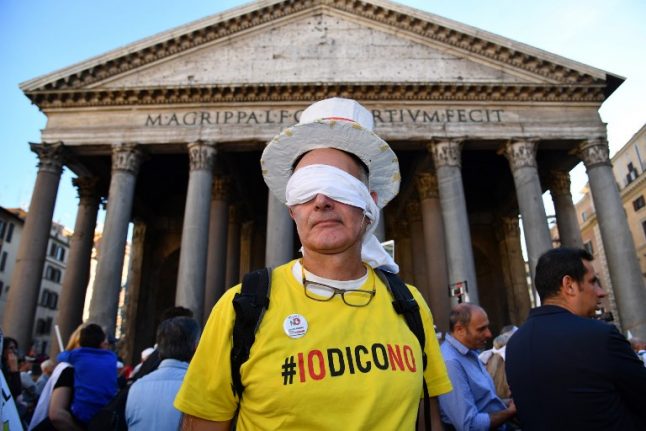 The senate passed the bill by 214 to 61, with one abstention.

It took five confidence votes to finally force the proposal through the upper house of parliament, just as it did in the lower house.

Members of the anti-establishment Five Star Movement (M5S) met each debate with furious protests in the chamber and on the streets, donning blindfolds in symbolic opposition to a law that they argue shuts out newer parties.

The new law allows parties to form alliances before Italy's next general election, which is due between March and May next year.

The Five Star populists, who have vowed never to join a coalition, claim the law is intended to hold their party back. They called the new system unconstitutional and said they would appeal to Italy's President Sergio Mattarella to stop the law in its tracks.

“You press a button, you think you're choosing but there's software that decides for you and eats your money. Here they eat your votes,” he said. In contrast the regional Northern League backed the reform, which is expected to benefit the far-right party by allowing it to team up with centre-right Forza Italia.

As individual parties, the ruling centre-left Democratic Party and M5S are currently running neck-and-neck in the polls, with Forza Italia and the Northern League dragging their feet.

But polls indicate that no single party would snap up enough ballots under the new system, a combination of proportional representation and first-past-the-post, without forming a coalition.

While a divided left may flounder, an FI and League partnership is expected to leapfrog into first place. The M5S would be out of the race.

The new system had the backing of the PD, FI, League and the small centre-right Popular Area.

Having passed the lower house earlier in October, with the senate's approval the bill will become law as soon as it is published in the official record.

The law's successful adoption after months of controversy increases the probability that Mattarella will dissolve parliament at the end of 2017 or early next year at the latest, making elections likely in March 2018.

Italian lawmakers had been under pressure to act after the country was left with two different electoral systems in its upper and lower houses of parliament in 2016 following a reform defeat for former prime minister Matteo Renzi.

POLITICS
‘On the rocks’: Is this the end for Italy’s Five Star Movement?
Url copied to clipboard!